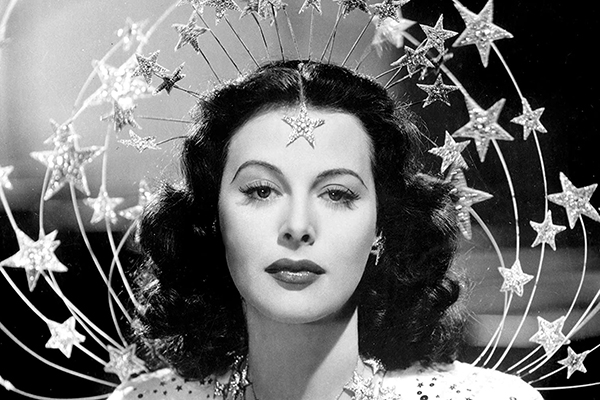 The spirited, intelligent and resourceful inventor known to the world as Hedy Lamarr gained fame in international film for her stunning beauty. Hedy summed up her attitude to such notoriety in the opening quotation of Alexandra Dean's documentary tribute "Bombshell: The Hedy Lamarr Story": "Any girl can look glamorous. All she has to do is stand still and look stupid."

Putting Lamarr's scientific aptitude and her glamour in context, director/writer Dean describes Lamarr's contributions to cinema and science with equal emphasis on both, a rare acknowledgement of Hedy's imaginative, insightful analysis of technological challenges. To her dismay, Lamarr received often gushing credit for her beauty but seldom and belatedly for her patents and ideas, even though Hedy's understanding of the usefulness of frequency hopping is now the basis for, as the film notes, "secure Wi-Fi, Bluetooth, cell phone, GPS and military technology." In the 1940s, during WWII, Lamarr came up with her unique idea for remote control torpedo guidance hoping, as she says, to help the British with radio-controlled torpedoes that would avoid jamming technology that resulted from sitting on one channel only.

This was not her first foray into astute problem solving. In the 1930s Lamarr suggested to good friend Howard Hughes that planes flew too slowly because of inefficient square wings. She studied birds and fish before advising Hughes on more aerodynamic designs, which he adopted. As analysts note and as animated sketches show, Hedy loved trouble shooting, happy that ideas came to her "naturally" with "inventions easy for me to do."

Born in Austria in 1914 to an assimilated Jewish family, Hedwig Eva Maria Kiesler married the first of six times at nineteen. Her film career had already catapulted her to public attention when she swam nude in the 1933 film "Ecstasy," banned by Hitler reportedly because she was a Jewish actress. After her munitions dealer husband died of a heart attack, she stole the maid's bicycle to escape to London with jewels sewn into the lining of her coat. By1938 through her own clever manipulations, Louis B. Mayer had Hedy under contract in Hollywood, though at her demanded salary.

"Bombshell" details all of this and more through interviews with her son, film historians, authors, and, in a gem of discovery by Fleming Meeks, a 1990 audiotaped interview with Lamarr herself. Also of note, interspersed film clips testify to her breathtaking appearance, to her dismay. As she said, men never got past her face, lacking interest in what was inside. Audiences were also captivated, making the 1949 "Samson and Delilah" (with Lamarr as Delilah) the second highest grossing film of the decade. She also graced numerous magazine covers and co-starred with male Hollywood leads. However, attempts in the mid-50s to produce her own films did not succeed. More seriously, Hedy's later years proved close to disastrous as she became a recluse after unsuccessful plastic surgery, among other problems.

Dean doesn't dwell on nor does she avoid the negative elements of Lamarr's life, opting to bestow praise where it is long overdue. Hedy Lamarr has, at long last, received credit for her technological genius, in scientific circles as well. It would have been wonderful if she'd still been her to enjoy it.