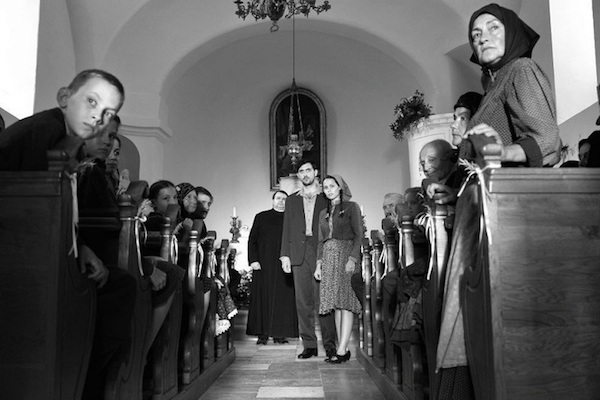 Knowing a bit of history will help an audience understand the deep meaning of "1945." Not knowing history means that the emphasis on this valuable film covers plot rather than foundation. And still it signifies. "1945" does in 90 minutes, in black and white, what many historical films never manage.

Most people, vaguely familiar with history, think of August 1945 as the end of World War II after Hiroshima and Nagasaki. But the war in Europe had ended the previous May. That meant citizens of Europe were hoping to return to an antebellum time whilst retaining rewards of the bellum.

On August 12, 1945, two men in black descend a train at the station in a Hungarian village. Whispers begin. Why are they here? What do they want? The villagers know who they are: they are Jews. And the townies assume that these two betoken the start of an avalanche of returnees, coming to take back the property that the Nazi gentiles stole. The citizens, most presumably Christians, act shamefully.

The Jews do what they have come to do, and they leave. But they leave a village in proper turmoil.

Director Ferenc Török begins "1945" in morning: a town clerk shaves as the radio announcer reports a bombing in Japan. Russian soldiers rough up a pedestrian. Women plan a wedding. Török builds suspense from those first moments in Hitchcockian minutiae, water drops and smoking timber, a pre-nuptial quickie, a cigarette enrolled, a promissory note enflamed. Török captures history in black and in white where color would have been promiscuous. His camera arrows in on symbols -- the scrim-like lace of curtains, a baby's shoes.

"1945," sobering and strangely uplifting, records horrid history, a comeuppance, a stand, and a retreat, while embracing a memorial. Török's film, which won last year's Yad Vashem Award at the Jerusalem film festival, matters so very greatly.