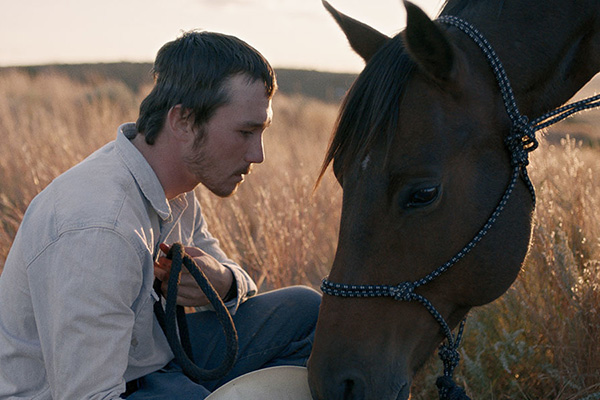 Brady Jandreau as Brady Blackburn is "The Rider" in the film of that title. Brady, family and friends play barely altered versions of themselves in what is close to a documentary. All credit to Chinese writer/director Chloé Zhao who sets and shoots the main action of this poignant character study on the Pine Ridge Lakota Sioux Reservation.

April 1, 2016, while competing in a Professional Rodeo Association bronc riding event, Brady's foot caught in a stirrup, throwing him under the bucking horse where a flying hoof cut about one and one quarter inches into his brain cavity. The first scene of "The Rider" opens after this accident with a dream Brady actually had as he awakened after three days in a medically induced coma. As Brady regains consciousness he imagines himself a horse, a saddle being put on him the way he felt getting a neck brace.

Experiencing occasional seizures, Brady faces critical decisions, warned he could die if he reclaims his livelihood training horses. In interviews he says, "I wasn't alive anyway, not riding ... I'm useless if I can't do what I was born to do." And so Brady quietly struggles to recover. Throughout his ordeal, he lives in a trailer with his Asperger syndrome teenage sister and his father, who sometimes drinks too much and gambles away the rent. Steeling himself and loyal, Brady visits his friend Lane Scott, a more seriously injured accident survivor.

In tune with the majestic sweep of the Badlands landscape, director Zhoa casts a spell. Watching Brady canter across the plains, as he does several times, is to witness poetry in motion. His taming and training horses is a sensitive, transcendent exchange between man and animal. More sobering, the video of Brady's injury is also actual footage. Technical elements further enhance this world. Nathan Halpern's music invites a contemplative mood, while Joshua James Richards' cinematography contrasts the inviting, wide-open prairie with the crowded trailer interior.

This amazing horse whisperer, who continues to train horses, has established a quarter horse breeding program called Jandreau Performance Horses. Brady missed "The Rider's" premiere at the prestigious Cannes International Film Festival because his mares were foaling. One important note, rodeo horses and bulls buck because flank straps tightly cinched in front of their back legs cause intense pain. This is animal cruelty pure and simple. Brady's compassionate taming and training stands in stark, welcome contrast. "The Rider" screens at Landmark's Plaza Frontenac Cinema.