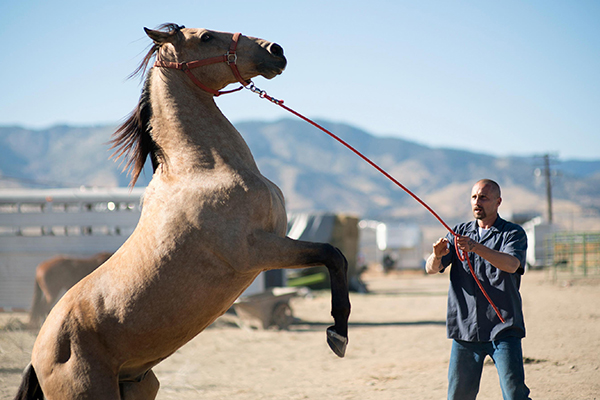 In this dramatization, at the Northern Nevada Correctional Center, the hard-core, anger-fueled Roman Coleman, in for domestic abuse, is paired with an equally aggressive, volatile mustang that he names Marquis. Without any previous experience with horses, Roman flounders, resorts to his habitual ferocity, and, predictably but appealingly, tames Marquis as well as his own explosive fury. In one of the most telling lines, the supervisor Myles tells him, "If you want to control your horse, you first have to control yourself.” As a horse owner for decades, I reaffirm that observation which resonates as the heavily tattooed, 12-year inmate Roman learns that sensitivity achieves the desired response, not brute force — not with Marquis.

Similar compositions for caged men and horses add a nice metaphorical commentary. Sensational scenes include a ferocious storm and several mustang training exercises; though, unfortunately, Marquis’ critical moments accepting a saddle and a bridle are absent. Subplots inserted for added context flounder, too abbreviated and haphazardly injected: animosity between inmate factions; Roman’s pregnant, alienated 16-year-old daughter’s appeals to him; a cellmate’s threats of harm to her if Roman doesn’t steal the horse tranquilizer ketamine.

Nevertheless, as Roman, Matthias Schoenaerts gives a convincing, frightening performance as a feral beast himself. Bruce Dern offers a complement as Myles, alternately cajoling and correcting inmates. As solid, Jason Mitchell plays Henry, an effervescent, experienced inmate trainer tragically caught up in the ketamine trouble. Shot almost entirely on location at the decommissioned Carson City Nevada State Prison, the claustrophobic cells contrast starkly with the wide-open plains and gorgeous snow-capped mountains. 'The Mustang' idealizes that environment, but it’s also easy to admire a program that, in many instances, saves an individual and a horse.