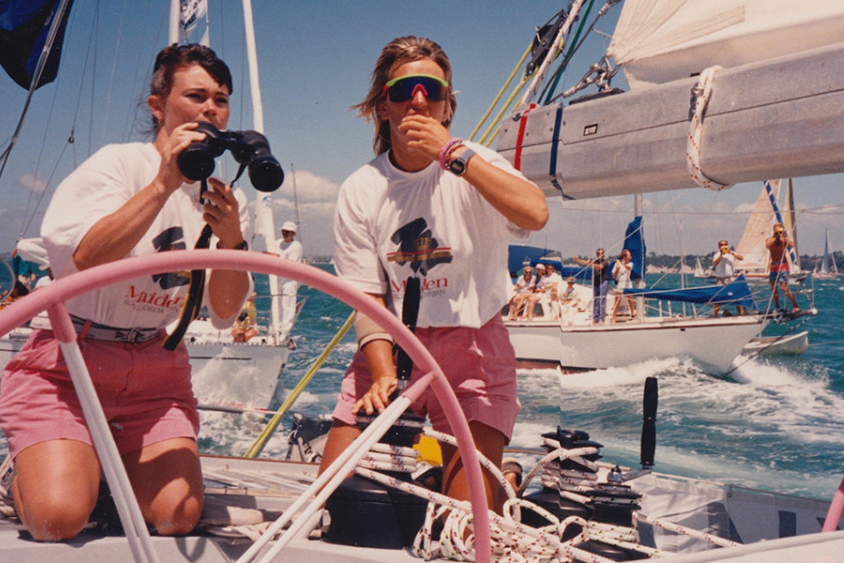 In 1984, Tracy Edwards wanted to participate in the Whitbread Round the World Yacht Race, held every five years, lasting nine months. Sexist attitudes relegated her to accepting a cook’s position. The male crew treated her so badly that a determined, confident Edwards decided to go another route — she’d put together an all-woman crew for the 1989-90 race.

The longest race on Earth, the Whitbread’s 33,000 nautical miles present a monumental test of tactical skill plus emotional and physical endurance, exactly what Edwards and her team welcomed. Director Alex Holmes’ 'Maiden,' the title from Edwards’ restored, aluminum-hulled yacht, chronologically documents this exhilarating competition, made exceptionally enjoyable because of contemporary interviews with Edwards, childhood friend / crewmate Jo Gooding, and other crew members. Opening shots of the documentary and many throughout establish the alarming, huge waves encountered, thrusting this 58-foot yacht into massive swells.

Footage of the dangerous traversing of the southern sea from South America to Australia, called the Sea of Certain Death, shows how terrifying their experiences were, what courage they summoned. In these roiling seas, with temperatures twenty degrees below zero, it took half an hour to dress and another half hour to undress, so some didn’t bother. Cape Horn posed no easy sail either, but rather than sensationalize the peril, Holmes listens to Edwards and her crew reflecting on this environment from today’s perspective, that is, noting the prejudices they faced. Also included, a bit amusingly now, are two journalists who acknowledge their skepticism and denigration of the women, though they still repeatedly call them “girls.”

May 28, 1990, the Maiden sailed to the finish line in Southampton, though for those who don’t know, I won’t reveal the results. Most importantly, the entire crew asserts, and this documentary proves they accomplished so much more than they set out to do, especially since they were told they couldn’t do any of it. 'Maiden' presents their adventure with well-deserved respect and admiration. As winner of the 2011 Nobel Peace Prize Ellen Johnson Sirleaf said, “If your dreams do not scare you, they are not big enough.” Nelson Mandela wrote, “It always seems impossible until it’s done.” Watching 'Maiden' is a thrilling realization of just such impossible dreams achieved.