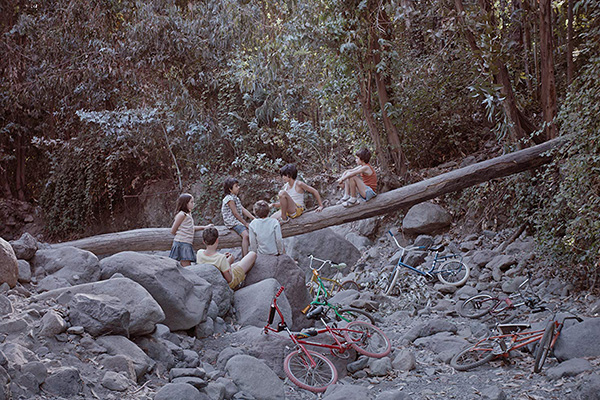 ‘Too Late to Die Young’ Observes a 1990s Chilean Commune

For “Too Late to Die Young” Chilean writer/director Dominga Sotomayor Castillo dips into her memories of growing up in a commune outside Santiago in the early 90s. Though the national political context remains offscreen, President Pinochet had recently exited amidst turmoil when, in 1990, Sotomayer’s parents undertook a dramatic move, along with other like-minded families, to the Andes foothills.

Filtered through what Sotomayor describes as recollection mixed with imagination, she revisits her childhood primarily through two 16-year-olds, Sofía and Lucas, and 10-year-old Clara. Sofía grapples with her emerging sexuality, enamored of an older Ignacio, while Lucas’ yearning focuses on her. On a personal level, alienated from her divorced father, Sofía longs to move in with her mother in Santiago, the city shimmering in the distance in one shot. Clara’s upheaval comes after her sheepdog disappears. Meantime, time flows, adult conflicts occur, and a New Year’s celebration is planned.

Escape from problems proves impossible, even in this collegial community that debates pros and cons of acquiring a generator, ways to deal with a break-in, and clean water access. Nature, of course, matters enormously, especially fire and water, offering their own soundscape along with several musical interludes.

With nonprofessional actors from area communes playing the roles of the children, the film adopts a cinema verité style, the camera often observing interaction from an unobtrusive perspective. Close-ups are reserved primarily for emotional moments the children experience, lovingly lingering on Sofía who remains calm while suppressing pervasive distress. We observe, invited to share if we can escape our conventional world for theirs.

For  “Too Late to Die Young” Sotomayer Castillo became the first woman to win the Best Director award at the Locarno Film Festival. In Spanish with English subtitles, “Too Late to Die Young” screens at Webster University’s Winifred Moore auditorium Friday, August 30 through Sunday, September 1 at 7:30 each evening. For more information, you may call 314-246-7525 or on the web at: Webster.edu/filmseries.