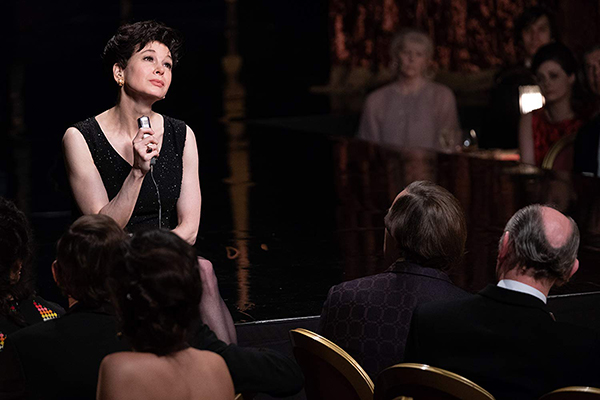 Simply titled “Judy,” director Rupert Goold’s film tackles the last year of Judy Garland’s life, 1968 to 1969. On the whole, it is not a happy one, given Judy’s reliance on alcohol and pills, a self-destructive addiction explored in flashbacks to MGM studio head Louis B. Mayer’s abusive treatment of her during the 1939 shoot of “The Wizard of Oz.”

Brief, behind-the-scene moments illuminate the dynamic of those months and go a long way to explaining Judy’s perpetual dependence on authority figures, lovers and drugs, even at the end of her 47 years. She fights on in sold-out concerts that both revitalize and crush her.

As Judy, Renée Zellweger expresses Garland’s painful vulnerability and powerful desire to please along with the extraordinary talent to do so. At the film’s Telluride premiere, Zellweger said she took a six year hiatus from acting, 2010 to 2016, to “have new life experiences.” She added that in her work she now “feels like a more authentic person, less grasping for memories” to inform her characters. This additional depth is on full display in Zellweger’s extraordinarily complex incarnation of Judy, including doing her own singing and dancing, no mean feat that Zellweger said she gradually slipped into, not intending to take all that on when the production began.

Also on hand at Telluride, director Goold called Judy “a secular saint.” Well acquainted with musicals and operas he has experience with, as he said, the emotional and physical demands of performance as well as the sensual quality, all captured in his handsomely directed film. Gabriel Yared’s nuanced score adds any interpretation needed.  An outstanding supporting cast lends its talent: Rufus Sewell, Jessie Buckley, Michael Gambon and others. But the film always focuses on Judy, searching for the heart and soul of her alternately triumphant and disastrous London theater concerts. Hollywood does gravitate to women suffering for their talent; and Judy Garland, known to all film lovers, epitomized the heights of both the sacrifice and the jubilation.

At Telluride, Zellweger acknowledged a lot of laughter and tears to capture Judy. I shared her reaction to Judy Garland’s final months as I marveled at the concert enactments, not the genius of Judy Garland but probably as close as a mortal can get. Check listings.