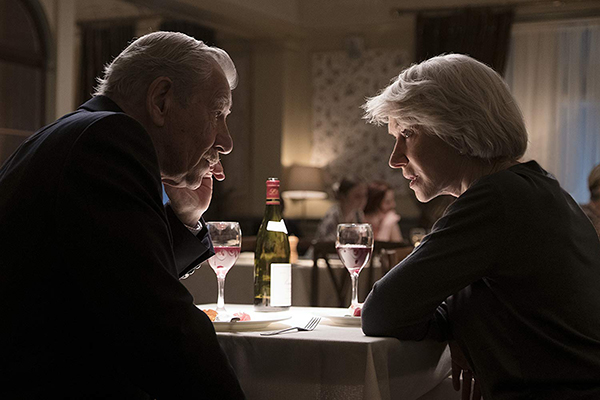 Not much about "The Good Liar" remains opaque. It's a pretty transparent hybrid, a mystery/thriller/romcom. That means that from the start, given the title, the audience is prepared to wonder who's telling the truth, when, and why. The con man finds his mark and sets his sights on this vulnerable widow.

So far, so banal. Roy meets boring Betty through a lovelorns' website. They type in their responses, lying the while. For example, Roy clicks "no" under "smoker" as he lights up. While they type on their laptops, the percussive sound of a manual typewriter belies the very year (2009) in which they're communicating and is a bit of a hint as to the history behind Roy's story.

The screenplay by Jeffrey Hatcher based on the novel by Nicholas Searle seems almost banal, the sort of plot made tolerable only because it's borne out by the sterling acting of Helen Mirren and Ian McKellen, who starred in the Hatcher-scripted "Mr. Holmes." "The Good Liar" suffers lulls, especially when the thriller turns to tepid romance, but for Anglophiles, it rises with Tobias Schliessler's shots of London, especially from on high.

Director Bill Condon, who also directed "Mr. Holmes," keeps "The Good Liar" under control except for a few volcanic scenes of physical violence. Both the script and the direction and the acting keep the audience lulled until the reveal, which is poignant in a "me, too" way and serves to remind mean men to pick better victims.

"The Good Liar" is not the best thriller or romantic comedy or mystery ever made, but with Mirren and McKellen it moves well within its reins -- like an old plug horse who knows the way home.