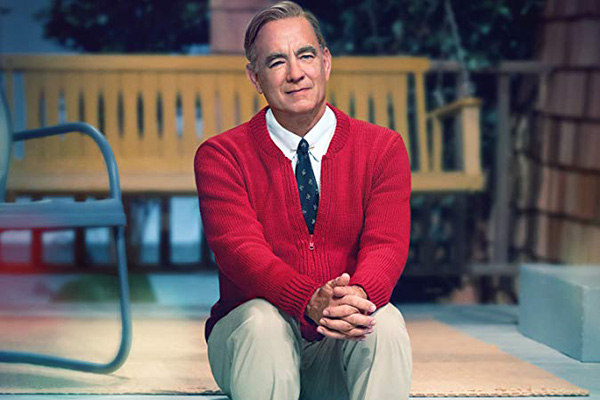 'A Beautiful Day in the Neighborhood': Reporter v. Rogers

Take one jaded reporter, add one children's pastor, and stir. That's the formula for "A Beautiful Day in the Neighborhood." The title for the film  comes from one of the Rev. Fred Rogers' own little songs. The formula works, in part, because it retains strands of the original story, pounded out by writer Tom Junod.

For this sturdy revamp, Junod transforms into Lloyd Vogel. He is assigned to profile Mr. Rogers -- to him, "that hokey kids' show host." Vogel's reputation is more cut and slash than grip and grin, and he does not do "puff pieces," he says; however, no other subject for this article wanted him to write their biography.

Vogel leaves his wife and their newborn to travel to Pittsburgh to interview the children's television show star -- and writer and musician and chaplain and producer -- whose rhythms move sweetly and slowly and lovingly so little pitchers' big ears can take in his gospel. Vogel has little patience for this icon, but the venerable host of Lady Abelin, Mr. McFeely, and King Friday the XVIII has all the patience in the world to help Vogel untangle his knotted relationship with his nasty father.

Matthew Rhys, a Welshman known for "The Americans," inhabits the dyspeptic Vogel, slogging from arrogant to dismissive to crushed along the character's route to lovingkindness. Susan Kelechi Watson of "This Is Us" plays his wife with sincerity. Christine Lahti carves a becoming cameo as his vinegary editor. The venerable Chris Cooper believably plays his hurting father.

Tom Hanks plays Mr. Rogers himself, but Hanks only occasionally lives in Rogers' signature cardigan. He works too hard at the cadence of Rogers' words, at the essence of his message of forgiveness, at acceptance of both Fred, the man, and Mr. Rogers, the character.

Marielle Heller directed the homage to Rogers, letting her cameras look into the eyes of each child, as Mr. Rogers advocated. Anne McCabe's editing is commendable. The script by Micah Fitzerman-Blue and Noah Harpster (who plays Vogel's brother-in-law) goes from Life through Art via Film.

"A Beautiful Day in the Neighborhood" creatively recreates the changes in one man's life by another's dedication to listening, reflecting, and caring.