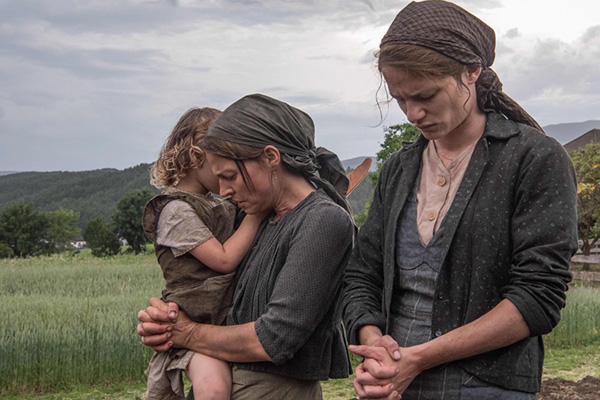 Brief Introductory footage from Leni Riefenstahl’s “Triumph of the Will,” glorifying Hitler, and black-and-white archival war footage interjected during Franz’s training accentuate the ominous contrast between idyllic home life and devastating hostilities. Linear in structure, the story meditates poetically and philosophically on Franz’s return to his small town, his farm work and his married life resuming until escalating WWII battles require Franz to report for duty, including his swearing an oath of loyalty to Hitler. An ethical, principled man, Franz becomes a conscientious objector, at peace with himself but in conflict with his insular community. His family supportive but in distress, Franz goes to jail with an ensuing trial tragic for him.

Cinematographer Jörg Widmer’s camera follows his characters in many early scenes, panning, tilting, and floating forward in ways reminiscent of Malick’s “Tree of Life,” on which Widmer also worked. As always with Malick, exquisite, even dazzling compositions and evocative, ethereal music convey the depths of emotion, also expressed in the tender letters read periodically in voiceover, letters written between Franz and Fani during his training and upon his incarceration. Over two years in editing, “A Hidden Life” flows from one scene to another, convincingly shifting from a loving family in distress to combative social interaction.

As Franz, August Diehl wordlessly telegraphs the soul searching and emotional agony of his dilemma, a poignant embodiment of moral courage. In 2007, the Roman Catholic Church beatified Jägerstätter, testimony to his moral purity, even though Franz’s priest  at the time encouraged him to serve. By any standards, he’s an inspirational individual, and Malick employs his expertise to present him in a deeply moving, magnificent film. In English and German with English subtitles, “A Hidden Life” screens at Landmark’s Plaza Frontenac Cinema.