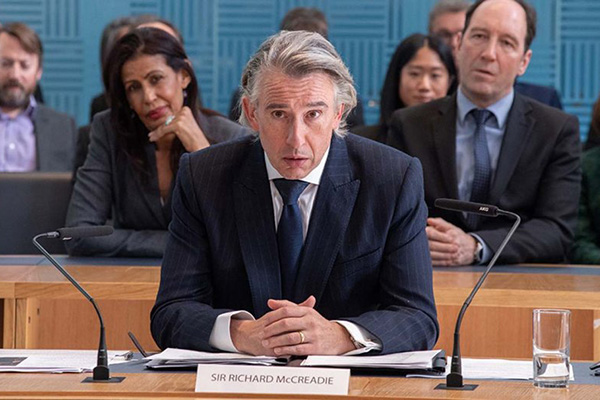 In addition to directing hysterically funny films, Michael Winterbottom, also directed a terribly serious film, "A Mighty Heart." With "Greed," he has conflated his interests by writing (with Sean Gray) a terribly funny film with a serious agenda. Once again, as in the funny films, Winterbottom works with Steve Coogan.

Coogan starred in Winterbottom's films, "The Trip," and "The Trip to Spain," but "Greed" is about Greece. That's where billionaire and bankrupt Sir Richard McCreadie plans to celebrate his 60th birthday. The theme is Greek, complete with an amphitheater and a lion and togas. Swanning between flashbacks to McCreadie's youth, where he took on the nickname "Greedy," Winterbottom has his lordship planning his birthday bash.

Winterbottom also offers flashbacks to McCreadie's bankruptcy trial and to McCreadie's life in fashion. That's where the agenda comes in, for who sews those fashions but horribly enslaved women in countries like Sri Lanka. Men like McCreadie do not care about these women. They care only that swaths of fabric are sewn and seamed and sequined in record order.

As McCreadie, Coogan is excellent, having practiced with his Partridge character. He argues with his wife, played flippantly by Isla Fisher, that the caps on his klieg-light teeth cost more than her fake mammary glands. Their children include an unreal reality star and a chip off the old block. His mother is played by the brilliant Scots actor, Shirley Henderson, her voice more bass than her wisp as Moaning Myrtle in the Harry Potter films.

A biographer, played innocently by David Mitchell, interviews McCreadie throughout.

Winterbottom's writing is sharp, full of academic wit, such as quoting "Ozymandias" and E.M. Forster, as well as replete with indignation, whether subtle or blatant. What everyou do, do not leave before the credits roll, for Winterbottom puts the endnoted data that support his agenda about billionaires and sweatshops.

"Greed" saws with a serrated knife throughout and then stabs in the end.