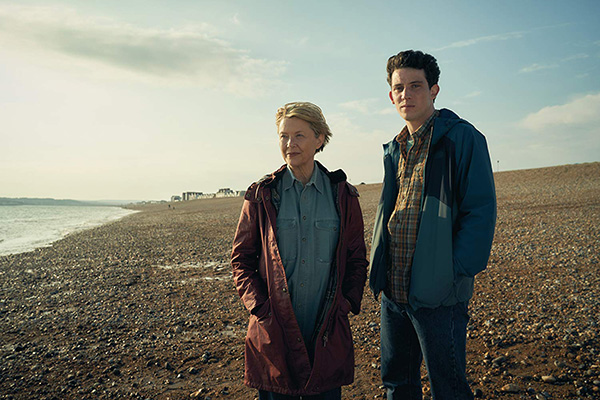 A marriage on the brink. Arguments. A son. Long walks. Consults with lawyers. Papers signed. Depression with determination. Happiness. No, this is not another review of "Marriage Story." This is a review of "Hope Gap," which those phrases also describe. Do we need another film about a marriage's ending?

We do if it's "Hope Gap." Although its theme mirrors that of another 2019 film, its execution strongly encourages viewing -- and even comparing with "Marriage Story" (take note, film discussion groups). One of the main reasons to watch "Hope Gap" is to see a trio of fine actors working its way through equally fine direction.

Bill Nighy, recently seen in "Emma," plays Edward in a sounder and steadier way than usual. ; Annette Bening, so good in "The Report," plays Grace, complete with a believable British accent. Josh O'Connor, also in "Emma," very believably plays Jamie. Edward decides finally, near his 29th wedding anniversary, to leave Grace. "Everything I do is wrong," he asserts. They argue.

Their arguments, written by William Nicholson, ring changes on the bells of truth, especially marital truth, especially the truth of a marriage that started off hopeful if delusional, as so many do. There's this gap of hope -- Hope Gap is not just the name of the seaside they live near.

Nicholson also wrote the script. He subtly  portrays Jamie as very like his father, which Nicholson cannily has Grace point out -- just as he has Grace note that, in the liturgy of the mass, the prayers ask for mercy nine times. Grace asks for grace many times from a husband, but he's already gone. He remains steady in his decision; she sinks. Jamie tries to accommodate both even as he's seeking his own separate way without divorcing his parents.

Not only are the acting honorable and the writing admirable but also the cinematography, especially the overhead shots, and the sound, especially the voice overs of poems and memories, adds dimension to "Hope Gap," another fine film about a marriage's dissolution.