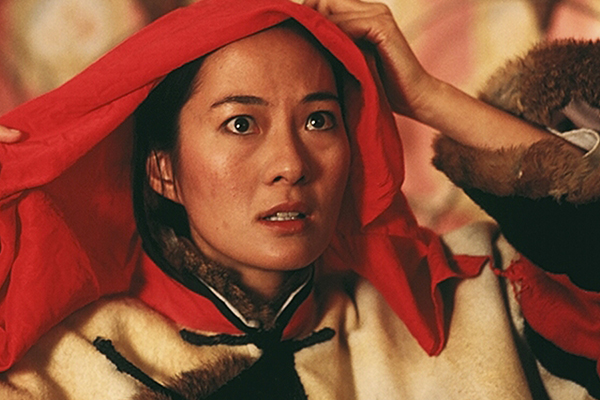 Ahead of the times for her 1990 production of “Thousand Pieces of Gold,” director Nancy Kelly adopted the unusual, refreshing perspective of the thirteen-year-old Mongolian woman Lalu. Beginning in 1880 northern China, amidst drought and hard times, bandits and soldiers rob her family of their sheep and livelihood, after which her father sells her to a marriage trader.

He sends Lalu by ship to San Francisco where she is sold again and  thereafter taken on horseback by Li Po to Oregon. There her travails multiply as Lalu, now dubbed China Polly, becomes the physical property of Hong King, the desire of miners, and a pawn in the dynamics of the camp. Lalu’s rebellious spirit unvanquished, she defies the white demons, as she calls them. Only Hong King’s saloon partner Charlie Bemis responds to Lalu as a sympathetic human being, though Li Po harbors a simmering, growing affection, expressed upon his return trips to the rough, remote frontier town.

Throughout her fight for independence, Lalu refuses to submit to treatment as property, despite pervasive prejudice against all the hard-working Chinese there. Even when subjected to harsh treatment, Lalu maintains a rebellious spirit that lifts her above stereotypical characterization and guides her fortunes. Adding to her difficulties, the Montana locations where “Thousand Pieces of Gold” was shot adds beauty but also intensifies feelings of entrapment. The sparse music further reinforces the somber mood.

The film is adapted from Ruthanne Lum McCunn’s novel, based on her great grandmother’s life during China’s Tai Ping Rebellion and after. In her 2015 author’s note, McCunn writes that the phrase “Thousand Pieces of Gold” refers (ironically) to a Chinese term of endearment, an acknowledgement of a daughter’s monetary value when sold to a marriage broker.

As Lalu, Rosalind Chao brings an emotional intensity to the role, while the always superb Chris Cooper complements Chao with a calm, thoughtful presence. Still, originally released in 1991, especially post HBO’s “Deadwood” and other such revisionist westerns, this story feels sentimental and safe, predictable while also admirable in its assertion of female agency. Newly restored, “Thousand Pieces of Gold” is available via Amazon Prime.