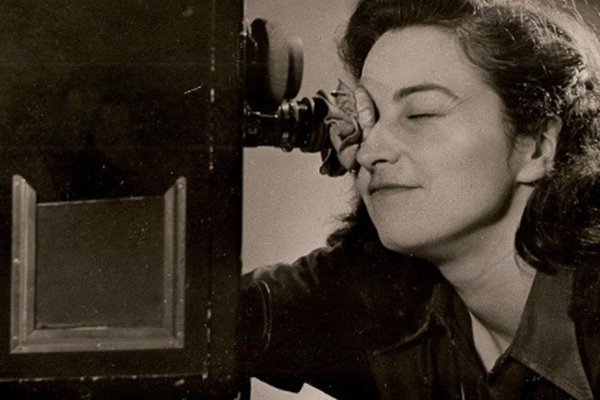 In “Women Make Film,” writer/director Mark Cousins has shouldered a monumental task. First, he promises A New Road Movie Through Cinema by looking “at film through the eyes of women filmmakers.” Second, he’ll accomplish this in forty chapters, not devoted to directors’ lives, not chronologically organized, and not exploring ways women are different from male filmmakers, though that emerges implicitly.

Rather, this 14-hour marathon will answer theoretical questions concerning the nature of film with clips taken from 183 women directors’ work. Topics range from ways to begin a film, to introduce a character, to present dreams, love, death, and interior life, to technical elements such as tracking, framing, editing, and close-ups, among other details. As punctuation between each chapter, all listed with titles onscreen, the film returns to the interior of a car driving through diverse landscapes. Seven women provide voiceover narration: Adjoa Andoh, Tilda Swinton, Jane Fonda, Shamila Tagore, Thandie Newton, Debra Winger, and Kerry Fox.

Cousins’ two-decade project contributes significantly to the recognition of women directors from around the world, from silent cinema to current releases. Nothing I’m aware of comes close to acknowledging the breadth and depth of so many women’s exceptional work, amply illustrated with well-chosen scenes, none repeated though several films contribute more than once. Cousins purposely chose illustrations that could stand alone, and they do. In the introduction, the narrator explains that this is not an attempt to be comprehensive, even purposely avoiding some famous films. In fact, stunning excerpts encourage my hope that previously unavailable films will now be more widely offered, even restored, so we may discover films from relatively unknown women directors. Aiding in researching them, the womenmakefilm.net website lists each chapter’s topic, film titles and directors with a frame capture including the date and country of origin.

On a minor note, I wish the analysis had gone further, rather than settling for describing what is apparent: “the camera zooms in,” “we cut to black,” or “and then” repeated too often. We hear, for example, “What she says is revealing, but so too is the image.” In what ways? Or we hear, “As though we’re looking down from a tree.” But we are! Why? The narrator seldom answers that question or “To what end?” In instances when interpretation is offered, the scene gains force and impact, reasons for the director’s choice explained. Chantel Ackerman’s “unblinking, rigorous frame” reflecting “her unblinking, rigorous world view,” as just one example.

Despite this minor quibble, above all, this extensive, globally sourced documentary offers solid support to Cousins’ assertion that “the film industry is sexist by omission. It’s a boy’s club.” Kudos to Cousins, with hopes (yet again) that “Women Make Film” will revise film history scholarship and open doors to such amazing talent, too often denied and sidelined. Divided into five parts, “Women Make Film” streams on Apple TV and is available for Blu-ray purchase via BFI (the British Film Institute.) To allow time to contemplate the fascinating content, I recommend watching one part at a time or even one chapter at time. Every section provides ample stimuli for thought and appreciation.