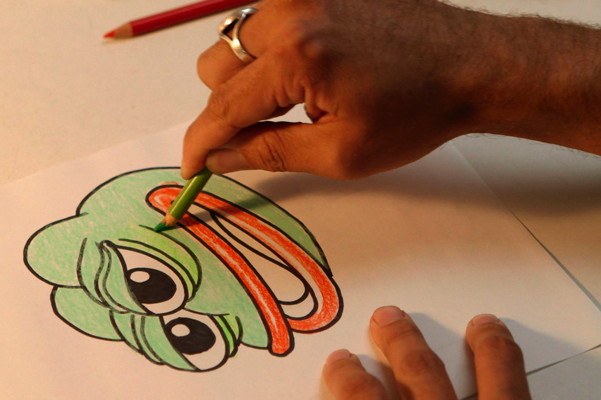 Animation artist Matt Furie’s Pepe the Frog has a lot of fans, in fact, so many that numerous, diverse groups have cavalierly and illegally appropriated his creation and twisted it to their ends. Drawn for a cartoon strip posted to Myspace in 2005, the irrepressible Pepe the Frog began with an irreverent characteristic: he enjoyed urinating with his pants down.

The title of director Arthur Jones’ documentary pinpoints the reason, “Feels Good Man.” And yet, upon learning of the overwhelmingly popular meme Pepe has become, Furie is amazed as much as baffled. However, Furie is alarmed that Pepe the Frog is used as the mascot for some seriously objectionable, unintended factions, including 4chan and those who promote and champion racist, white supremacist causes. Inadvertently, Pepe’s originator Furie enabled what becomes global appropriation because, as he says in the film, as an artist he dislikes taking legal action against others of his profession. As a result, he resists enforcing his legal copyright that would restrict such unabashed theft and dangerous misrepresentation. Furie in no way agrees with the hateful messages to which Pepe has been appended but his efforts to regain control prove a formidable challenge.

It seems, with his ultra-broad smile, floppy tongue, and huge, questioning eyes, Pepe the Frog offers an irresistible enticement to many without qualms. Director Jones drives home serious points while miraculously keeping the mood playful through a whip smart confluence of his own animated sequences, interviews with Furie himself and others, plus clips featuring Stephen Colbert, Samantha Bee, Hillary Clinton, Nicki Minaj, Alex Jones, and more. At the 2020 True/False Film Festival, the late night audience howled and groaned through the unexpected dissemination that rocketed Pepe across the globe. Most surprisingly, he shows up as the positive image of Hong Kong pro-democracy protestors, though few seem to know why or where this frog originated.

Ironically, the title “Feels Good Man,” which refers to Pepe’s joy urinating with his pants down, accurately describes the infectious humor here. But make no mistake about it, at this time of appalling internet deceit and untrustworthy postings, “Feels Good Man” presents an entertaining but sobering warning for anyone who uses the internet. Winner of several awards, “Feels Good Man” is available on multiple platforms, including iTunes, Vudu, and more. Check listings.