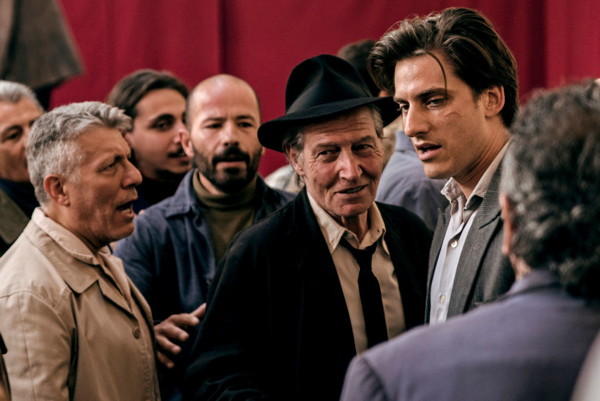 Famous for his 1903 novel “Call of the Wild,” Jack London is less well known for a fascinating story of another kind of survival—within a restrictive, class conscious society. Written in 1909, the novel “Martin Eden” takes place in Oakland, California. Italian director Pietro Marcello transplants it to Naples, Italy after WWII, with liberties for indicators of time.

Protagonist Martin Eden labors as a sailor. On shore he confronts and runs off bullies beating Arturo, son of the wealthy Orsini family. At the Orsinis’ home, Martin meets Arturo’s sister, Elena, with whom he falls obsessively in love. Uneducated but ambitious, Martin vows to become a writer, to present the world through his eyes. To that end, he reads voraciously, writes on a portable typewriter, and sends his work to various journals, all initially rejecting it. Once published, Martin changes dramatically, but the heart of the film revolves around his philosophical arguments, often initiated by the failure of education to provide him social polish or acceptance.

In press notes, director Marcello says his liberal adaptation sought to pursue the novel’s themes: “the relationship between the individual and society. . . the class struggle.” Exploring various groups’ clashes, Marcello opens with shots of anarchist Errico Malatesta and, at unexpected places in the developing relationships, inserts memories and archival footage. Most significantly, Martin will debate values with the arrogant bourgeoisie, striking union laborers whom he calls slaves, the elder philosopher Russ Brissenden, a kind woman who takes him in, and just about anyone he encounters. Labeled a socialist, he is denounced in the press and shunned, even as he angrily indicts individualism, while succumbing to its self-destructive, indulgent cynicism. Upon giving his novel to Upton Sinclair, Jack London wrote, "One of my motifs, in this book, was an attack on individualism (in the person of the hero). I must have bungled it, for not a single reviewer has discovered it.” Rest easy, Mr. London. It is on full display here.

Beautifully shot and superbly acted throughout, for his performance as Martin, Luca Marinelli won the Best Actor award at this year’s Venice Film Festival. In Italian with English subtitles, showing at Landmark’s Tivoli Cinema and available for streaming through the Kino Lorber website.