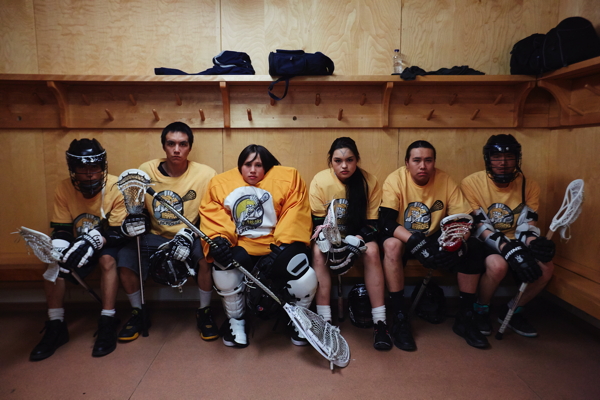 ‘The Grizzlies’ travels to the Inuit Kugluktuk for an inspirational story

In “The Grizzlies’” opening sequence, director Miranda de Pencier establishes historical context through 1920s and 30s sixteen millimeter footage shot by her grandfather in the Canadian Arctic. Now, in the twenty-first century, this area has the highest suicide rate in North America. And flying into remote Kugluktuk to complete community service requirements is recent university graduate Russ Sheppard.

Hired to teach history for a year in the local high school in this Nunavut town of 1400 Inuit, Russ finds himself immersed in a totally unfamiliar culture; for example, Russ wants to be called “Mister Sheppard,” and is told, “That’s a white man’s word and we don’t use it.” He can’t pronounce names and also can’t get used to knocking and then just entering a home. The silence in his class is deafening; and, at one point, his group of twenty-one students dwindles to one. Sheppard finds himself beyond culture shock, and the Inuit community doesn’t welcome yet another clueless outsider.

Inspired by ESPN sports reporting, what Russ does next lifts this film, ten years in the making and shot on location, to another level. Knowing First Nations people invented lacrosse, North America’s oldest organized sport, despite facing daunting, enervating adversity—this is no Hollywood fantasy—Russ starts a lacrosse team with this ragtag, defiant group of teenagers. Encouraged by his results, Sheppard recklessly decides to take the Grizzlies, the name they give to the team, to the Canadian championships in Toronto, even though he’ll have to appeal to the governing town council for money and their approval.

Stark but gorgeous landscapes punctuate the narrative. The emotional impact of this isolation restricts choices and, without opportunities, depression sets in, alleviated through indulgence in alcohol. All of this is crystal clear but handled with impressive grace by the Inuit who dominate the film in defiance of the “white savior” syndrome. As Russ, Ben Schnetzer expresses the perfect balance of dismay and determination, listening and learning, connecting to these beleaguered teenagers, most appearing for the first time in a film, handling humor and serious events with equal skill. Emerald MacDonald as Miranda, Booboo Stewart as Kyle, Anna Lambe as Spring, Ricky Marty-Pahtaykan as Adam, and really all the others are superb, including a cameo by Russ Sheppard as a Toronto referee. Updates on the individuals’ lives that come during the end credits are as inspirational as they are a tribute to these men and women. “The Grizzlies” is available through multiple streaming platforms.