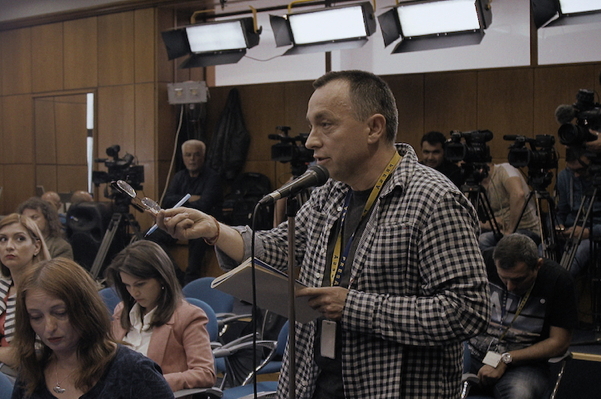 Shocking, ruthless corruption plagues health care and businesses from top to bottom in Bucharest, Romania, as meticulously detailed in director Alexander Nanau’s documentary “Collective.” The title comes from the nightclub Colectiv that burned October 30, 2015, twenty-seven killed on site when the band Goodbye to Gravity’s pyrotechnic display, horrifyingly captured on cell phone, ignited the club’s back wall and ceiling.

Without fire exits, partygoers had little chance to escape. But the conflagration just begins the nightmare for multiple additional fatalities who received inhumane treatment in hospitals, revealing staggering cruelty and greed. Callous indifference to basic care resulted from antibiotics diluted to the point of ineffectiveness against bacterial infections, the unethical pharmaceutical company Hexi Pharma, deferrals in transferring patients abroad for needed attention, and a bribery-driven appointment system for medical administrators.

Courageous individuals, their very lives endangered, included whistleblowers and activists. Citizen protests led to the government collapse, greater openness for bureaucratic oversight, a new Minister of Health, and upgraded safety requirements. But the path to these improvements runs through one government excuse after another. Remarkably, editor in chief and primary investigative journalist Cătălin Tolontan and his team represent the Sports Gazette, not a political news division. Weaving together the complex elements they discovered, without intrusive narration, relying on his superb storytelling skills, Nanau peels back layers of guilt with astonishing, unanticipated revelations gleaned over fourteen months of his shooting. Through news reports and surveillance, like a fly on the wall, Nanau assembles the exposé with exquisite editing moving from one appalling discovery to another, a credit to great journalism.

A warning: some scenes are difficult to watch, especially those of hospital patients with worms in their wounds and Teny Ursuleanu who courageously displays the scars from the fire, including her missing fingers.