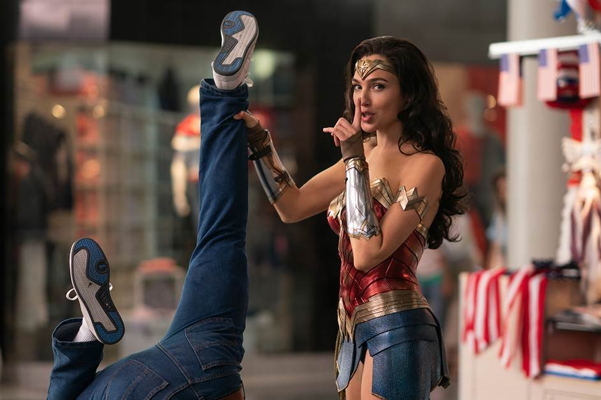 “Wonder Woman 1984” has a lot on its mind, perhaps too much since, distinguishing superhero movies, the most thrilling sequences are the action scenes. No exception here, as the opening tournament delivers an exceptionally clever test of each woman’s physical agility and ability, though Diana Prince, Wonder Woman, competes here as a girl, already exhibiting astonishing gifts.

On this fanciful Themiscyra Island, Diana must, however, learn more commendable, enduring values through the guidance provided. After this instructive introduction, the two and a half hour film takes off with focus on the de rigueur greedy, egomaniacal madman, here Maxwell Lord, who wants it all, no matter those sacrificed. Though an  indictment of the 1980s zeitgeist, this hyper-villain also feels all too 2020, and lacks originality.

In the wings, an archeologist identifying artifacts at the Smithsonian, a low key Diana befriends Dr. Barbara Minerva, on her path to the dark side as the evil Cheetah. In between work and mayhem, Lord steals a valuable stone that confounds logic from Dr. Minerva. Globe hopping, Lord lures Diana and her love Steve Trevor (yes, he’s back) into pursuit, conflict, and an exhilarating desert chase pumped up, as usual, with Hans Zimmer’s score. Through many complications not elegantly cobbled together, The Cheetah vs. Diana battle prepares for the climactic scene with Lord, so abandon hope for any surprises except director Patty Jenkins’ inspired staging.

Superhero adventures require a willing suspension of disbelief, an embrace of playful archetypes, so let’s put the criticism aside. On its own terms, the appeal comes down to Gail Gadot reprising her Wonder Woman role with panache and confidence, charisma and inventiveness. As Cheetah, Kristin Wiig relies too heavily on her SNL mannerisms in the first half but transitions to a sensational villain. As Maxwell Lord, Pedro Pascal overacts wildly, intentionally, probably so relieved to jettison his Mandalorian helmet and armor. The supporting actors perform well, and the technical crew create an appealing, fanciful world. So, if superheroes appeal, though there are mere nods to non-sexist presentations, “Wonder Woman 84” beckons, streaming on HBO Max and at select local cinemas.