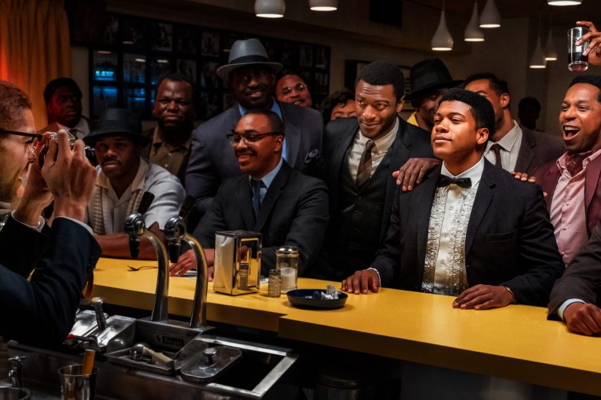 Imagine February 25, 1964, and four extraordinary Black men coming together for an evening of camaraderie. Then imagine these amazing men are Sam Cooke, Jim Brown, Cassius Clay, and Malcolm X. This is exactly what director Regina King’s "One Night in Miami" spectacularly presents as this remarkable foursome talks, laughs, argues, and probes the most significant issues of Black America.

For those unfamiliar with these empowering men, prologues introduce each, three of them suffering major public setbacks leading up to this noteworthy night: Clay defeated by Sonny Liston, Malcolm X in conflict with the Nation of Islam, and Cooke's musical performances disrespected by white audiences. Even Brown, at the top of his football career, is personally, grossly insulted, aware that despite all his fame, he's still dismissed by a white man.

In a recent webinar, screenwriter Kemp Powers, who adapted his own play, spoke of portraying the dynamic among these young men: Malcolm X and Cooke in their thirties, Brown 28, and Clay just 22 and on the eve of announcing his Muslim allegiance and name change to Muhammed Ali. Powers, who transitioned from journalism into screenwriting, said he learned to listen to specific voices as they reveal character. Here the individuals present a unique complexity, faithful to their identities.

What stands out is the continuing relevance of the array of issues debated, no holds barred. They confront society's and each other's attitude to shades of skin color, appeal or lack thereof to white audiences, economic empowerment, religious allegiance, and personal conduct. These titans argue as only good friends in a struggle together can.

With minimal rehearsal time, sometimes none, these actors astonished me in almost every scene, their vulnerability and believability flawless. As mentioned during the webinar, performance versus impersonation is difficult, a tough mountain to climb. All succeeded with consummate skill: Kingsley Ben-Adir as Malcolm X, Eli Goree as Cassius Clay, Aldis Hodge as Jim Brown, and Leslie Odom Jr. as Sam Cooke.

"One Night in Miami" is a treasure, a reminder of how critical the contributions, often at great emotional expense, were by these men and how far we still have to go. "One Night in Miami," among the very best films of the year, is screening at select cinemas and streaming on Amazon Prime beginning January 15.