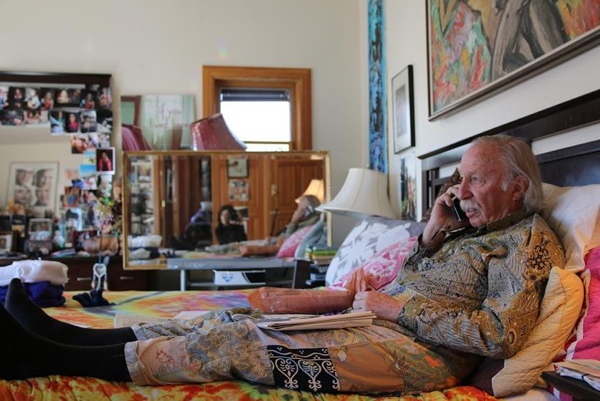 'Film About a Father Who' examines a problematic relationship

Among the most important, complex relationships are those with our parents, relationships often painful to probe. And yet, in "Film About a Father Who," here's documentarian Lynne Sachs courageously exploring thirty-five complicated, problematic years of interaction with her father Ira. In addition to archival 8- and 16-millimeter footage, she interrogates Ira, grandmother Maw-maw, brothers, sisters, an ex-wife, and Ira's girlfriends.

And what she learns in her incredibly honest profile is deeply disturbing. For Ira was, though cheerful, emotionally detached and an unrepentant womanizer. His mother, Maw-maw, describes him as a cripple, handicapped, since he had a wife, a mistress, and, as much as he could, multiple women. Director Lynne, his daughter, explicitly asks Ira about his life and behavior, to which Ira repeatedly replies, "I don't remember." In her investigation, Lynne discovers two previously unknown siblings (Ira had nine children), Ira's traumatic childhood, fueled by Maw-maw abandoning Ira to lead her own life, and his real name.

None of these details suggest the truly captivating appeal of "Film About a Father Who." That resides in Lynne's pursuit of an ever-elusive understanding of Ira, of his essence. In her quest, Lynne and her brother Adam describe Ira having "his own language and we were expected to speak it." They concur that they loved him so much that they agreed "to his syntax, his set of rules," though they always felt there was a dark hole somewhere in his youth. Significantly, Lynne and a sister also acknowledge a shared rage they couldn't name for the man called the Hugh Hefner of Park City, Utah.

"Film About a Father Who" is an emotionally wrenching scrutiny of another person, much less a parent. In voiceover narration, Lynne defines her grappling with her father best when she says, "This is not a portrait. This is not a self-portrait. This is my reckoning with the conundrum of our asymmetry, a story both protracted and compressed." That she worked on this film for decades acknowledges the critical role her parents, and probably most of ours, play in our lives, their impact inestimable. It may raise the question, "Can we ever really understand another person?" Whatever the answer, Lynne Sachs shows her effort results in a powerful, haunting film. “Film About a Father Who” is available on the Cinema Guild website and through a direct link at the Webster University film series website.