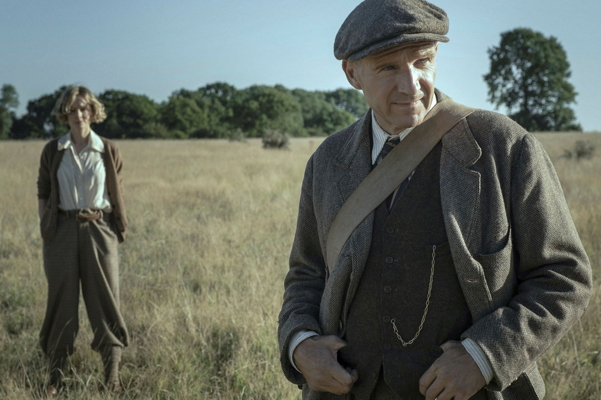 In “The Dig” Australian director Simon Stone achieves two worthy goals. First, he dramatically chronicles the 1939 discovery and unearthing of the imprint of an eighty-six foot long, sixth-century burial ship found beneath one mound at Sutton Hoo, Suffolk, on England’s east coast. Second, he makes archeology fascinating, thanks in large part to an economical script and understated performances.

More accurately, rather than showcasing their acting as an ostentatious display, Ralph Fiennes as the excavator, as he calls himself, Basil Brown and Carey Mulligan as landowner Edith Pretty, who intuits the mounds hold secrets, embody their characters. Moreover, Fiennes has a flawless accent (I taught in that area for a semester.) Born in Suffolk, Fiennes, famous for immersing himself in his roles, bicycled around the area wearing heavy clothes, as Basil does in the film. A chameleon, Mulligan, though physically slight, effects the bearing of a wealthy, but infirm widow. There’s not a wrong moment from either. The astute script comes courtesy of Moira Buffini, adapting John Preston’s 2007 novel.

Kudos also to director Stone for championing the history-making find in which his aunt, Peggy Pigott in the film, participated. Within the burial chamber in the ship, the inclusion of a treasure trove of gold jewelry, money, helmets, and other items revolutionized ideas about the sophistication of Anglo-Saxon civilization. Tension within 1939 England is heightened by the build-up to war. Other subplots fill out the film’s nearly two hours, a homosexual theme and a troubled romantic attraction indicative of the time but not really necessary. More relevant is the brash vying for the display rights between the British Museum and the local Ipswich Museum (the British Museum won.)

Class matters. The self-taught Brown does not hold a university diploma, but the experts with their arrogance take a beating, especially since Brown also displays considerable knowledge of the cosmos, sharing his telescope with Edith’s son Robert. Mike Eley’s cinematography lends an ethereal ambiance to the landscape, alternating with destructive downpours. “The Dig” documents an historic event. At select local cinemas and available for streaming on Netflix.