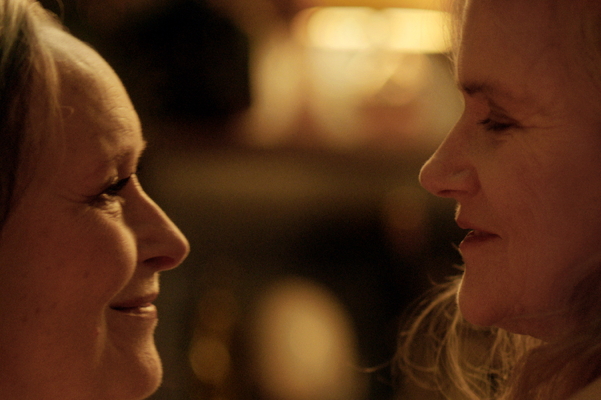 First time feature-film director Filippo Meneghetti has crafted an elegant, sophisticated narrative in “Two of Us.” In contrast to lesbian stories centering on young women, co-writers Meneghetti and Malysone Bovorasmy present two widows, Mado and Nina, both in their seventies. They’ve been lovers for two decades, but secretly because of Mado’s fear of her daughter Anne’s and son Frederic’s reactions.

Set in a present-day, provincial French town, Mado’s apprehension is realized in the course of unanticipated revelations. Mado and Nina share their building’s top floor apartments, an elevator landing connecting them. Meneghetti says the idea came to him when visiting a friend and hearing two women speaking on the top floor, the doors of their apartments open.

He realized adding a romantic involvement to this physical connection could communicate their love metaphorically with the architecture expressing contrasting personalities within very differently appointing living spaces. The differences between them comes through in the sound design as well: Mado associated with harsher, unpleasant sounds, Nina with music and silence.

The more assertive, Nina urges Mado to sell her apartment so they can move to Rome where they first met. Though she struggles, Mado finds herself unable to tell her adult children, lies to Nina, and dramatic events follow. The first half of the film belongs primarily to Mado, the second half to Nina. Both actresses, Barbara Sukowa as Nina, Martine Chevallier as Mado, give extraordinary performances, both of them icons. As impressive, Meneghetti relies on restraint and understatement, at several significant moments watching from a distance, not moving the camera, in a long take. This effectively places the viewer in the space as an observer. At other times, creative compositions reveal minimal details with information slowly building in a film with so much hiding going on.

In that regard, “Two of Us” draws on several genres: romance, suspense (Hitchcock an influence), and psychological drama, especially in two dream sequences, one as the film begins. The song “Sul mio carro/On My Chariot” that plays the three times Mado and Nina connect says it best: “If you love me, if you will come with me . . . the earth will be without boundaries.” “Two of Us” is France’s official entry for the Academy Award for Best International Film, in French with English subtitles, at Landmark’s Plaza Frontenac Cinema and streaming at multiple online services.