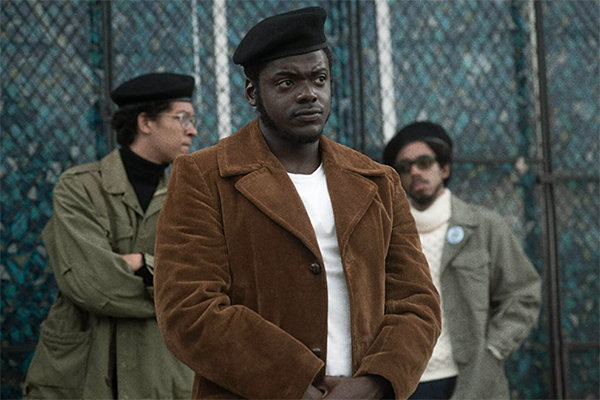 'Judas and the Black Messiah' Tears At History

"Judas and the Black Messiah" tells the story of two men in the 60s in Chicago. The Messiah is Fred Hampton, Chairman of the Illinois Black Panther Party. Judas is William O'Neal, a turncoat within the ranks of the Black Panthers who was a double agent for the FBI.

There is nothing pretty about "Judas and the Black Messiah." It is, of necessity, a very dark movie, dark in its setting and lighting, and dark in the horrible history of J. Edgar Hoover against Blacks in general and, here, Fred Hampton in particular. Hoover called first for Hampton's jailing and then for his killing. At 21.

Hampton was young and charismatic. If there is any light at all in "Judas and the Black Messiah," it is in Fred Hampton's messages of cooperation and conciliation and coordination. He insists his brothers treat the sisters in the movement with dignity. He declares that the Panthers care for the children of Chicago -- feed them, sit with them, educate them. He is poetic: "You can kill a revolutionary," he says, "but you can't kill a revolution."

On the other hand, O'Neal is a career thief who gets high on manipulating (he would have made a powerful CEO -- if that career had been available to Black men in the 60s). Instead, he manipulated Roy Mitchell, his contact at the FBI, who thought the Panthers and the KKK were basically the same. Mitchell, in turn, twisted his colleagues. It was spy v. spy, black v. white, phallomachy and peacocking.

As Mitchell, Jesse Plemons matches the grease in the agent's hair. LaKeith Stanfield electrifies both of O'Neal's faces. Martin Sheen portrays Hoover; despite make-up, it's hard not to think of President Josiah Bartlett when Sheen opens Hoover's fat, fascist mouth. Dominique Fishback plays Deborah, a poet, a revolutionary, and mother of Hampton's son, and Dominique Thorne plays a security captain for the Panthers.

In their script, among the "bro"s, "dig"s, and "right on"s, Will Berson and Shaka King highlighted Hampton's words, their wit and wisdom, their evergreen vision. They distinguish in decibels between speechifying and seducing. In his direction, King honors Hampton by focusing on the Panthers' goodness, for instance, feeding the hungry: "I'm not talking about handing out turkeys at Thanksgiving," Hampton cautioned.

"Judas and the Black Messiah" includes history cards with the end credits, information that should shake foundations already loosened by this shattering film.