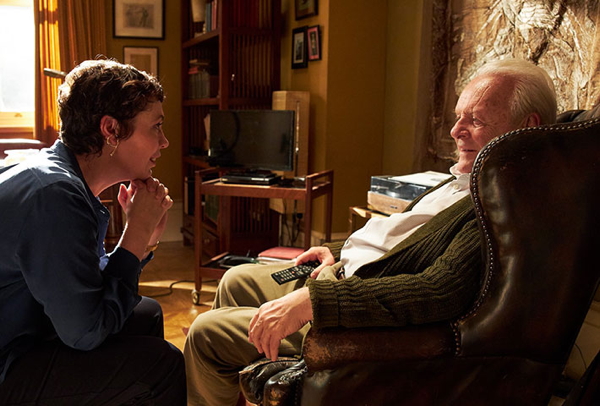 ‘The Father’ takes viewers inside dementia for patient and caregiver

Director Florian Zeller achieves a trifecta with his debut feature film “The Father.” First, Zeller realistically depicts the mental confusion of octogenarian Anthony who weaves in and out of reality, struggling with a dementia he refuses to acknowledge, one symptom of his cognitive deterioration. Second, Anthony’s primary caregiver, daughter Anne, elicits empathy through scenes focusing on her painful coping.

Third, Zeller’s dramatization of his own play, adapted for the screen by him and Christopher Hampton, never betrays its theatrical origins while still presenting effective art direction that metaphorically displays the restrictive mental and physical worlds in which Anthony and Anne reside. In addition, many objects and paintings implicitly comment on the tangled and muddled struggles to cope with details bewildering to both Anthony and Anne.

Because Anthony is alternatively feisty, charming, and combative, while Anne remains honest, questioning, and confrontational, their exchanges never deteriorate into sentimental indulgence. Instead, more productively, they engage and grapple with their own poignant, distressing circumstances neither chose, increasingly evident as the gap between what Anthony says and what exists becomes obvious and heartbreaking.

All of this works so impressively because of the master class in acting presented by Anthony Hopkins as Anthony and Olivia Colman as Anne. Both communicate more with a reaction and a glance, than pages of dialogue could ever convey. The supporting cast adds strong performances, but this is Colman’s and Hopkins’ tour de force as each shifts within seconds through joy and uncertainty, agony and grief, their bodies and voices subtly changing as they listen, really listen to each other. Their sadness exhibits a range of emotions within a nanosecond. If only it were not because of such loss, I’d have been giddy for them. But, alas, “The Father” chronicles the devastating decline of oneself, of one’s father, presenting situations fraught with difficulties not too dissimilar to those we may find ourselves facing this past year. “The Father” is available at select cinemas and on demand.