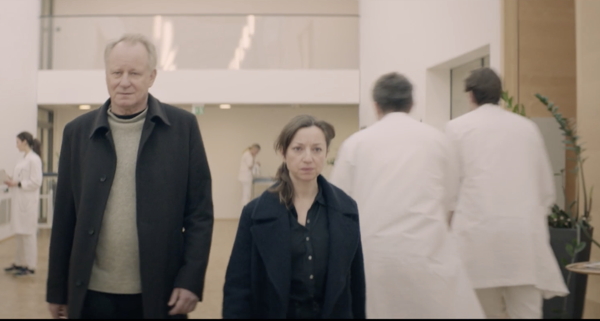 Norwegian director Maria Sødahl’s autobiographical film “Hope” sounds, at first glance, potentially off-putting. Anja Richter, a middle-aged dance choreographer, returns home from a successful performance in Amsterdam, pleased with reviews. But something feels off, just not right. Anja’s dizzy and has trouble seeing clearly even with her glasses. An MRI will confirm her suspicion.

Anja learns that the lung cancer she recovered from the previous year has metastasized to a brain tumor surrounded by fluid. Her diagnosis: an incurable condition with the possibility of surgery. The medical prediction: three months to live. This dire situation is the heart and soul of an honest, direct, unsentimental narrative that probes the emotional connections for Anja and her partner Tomas, their three children, and Anja’s three stepchildren, representing a range of ages and reactions.

Both Anja and Tomas have devoted themselves to successful professional careers. They live together physically, amicably but detached. Subsequent interactions between them and with family, nurses, doctors and surgeons unearth a full range of emotions, some long suppressed, others relatively new, all offering insightful revelations about the complexity of human behavior.  “Hope” probes the ubiquitous, critical need for support, love, sharing, and understanding.

It’s a worthy cliché that when the unimportant, superficial trappings of busy lives are laid bare and stripped away, we discover what is truly valuable. But writer/director Sødahl doesn’t pretend this is easy. Most significantly Anja expresses her roller coaster of shock, anger, resentment, confusion, relief, affection, and, yes, hope. As Anja, Andrea Bræin Hovig and as Tomas, Stellan Skarsgård use their facial expressions to convey the breadth and depth of their profound coping, never overacting, always faithful to the moment. Their performances transported me in their unadulterated discovery of the beauty of love.

Norway’s submission for the Golden Globes and for the Academy Award for Best International Feature Film (it made the shortlist of fifteen), in Norwegian and some Swedish with English subtitles, “Hope” is available at KimStim.com with a direct link on the Webster University Film Series website.