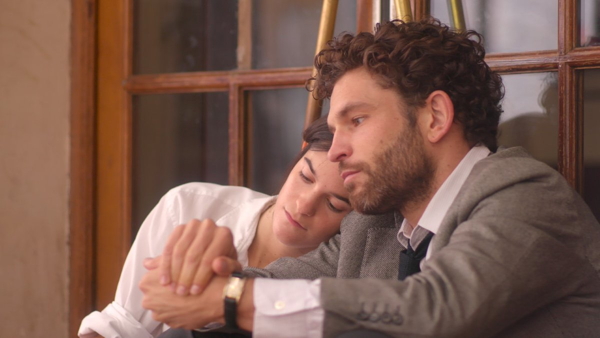 Remarkably, at fifteen, Lindon decided to write about her feelings and thoughts, noting that she was happy at school but “I felt a certain melancholy” for “this certain age, where you are not totally a child anymore, but not really an adult yet” (quoted in press notes). As dramatized in “Spring Blossom” Lindon achieves her stated purpose to “make an artistic gesture.” She adds that Suzanne “does not really know how to live or behave with people her own age.” Several scenes of Suzanne with high school classmates find her completely disengaged, in the same frame but apart from her friends, bored with their meandering, superficial exchanges.

And so, she gravitates to the unfamiliar and entrancing theater world she walks past daily and slides into a fascination with Raphaël. Soul mates, Raphaël declares to his director that he no longer knows how to act. In effect, they are both at a turning point, a threshold for discovering critical insights into love and life.

Avoiding the typical, confrontational parent-child dynamic, Suzanne gets along well with her loving parents, especially with her father. Equally unconventional and uplifting, Raphaël (a fine Arnaud Valois) is not the older man taking advantage of the naïve teenager. He’s equally lost, searching for connections, meaning, energy. Their relationship is heartening and endearing, completely believable, allowing the chaste love story that unfolds to take and hold center stage. The synchronicity between the two is poetically, beautifully expressed in two, one-take pas-de-deux sequences. In one, they sit at a café table and mirror hand and arm movements. In another, they dance balletically, wordlessly, alone on stage.

Suzanne Lindon has created an exceptional, insightful film. In French with English subtitles, “Spring Blossom” is available at KimStim.com and through a direct link on the Webster University Film Series website.