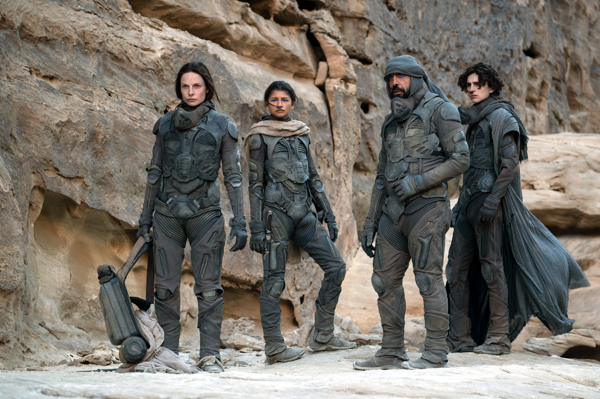 We’ve waited a long time for director Denis Villeneuve’s “Dune,” and, yes, it has been worth the wait in terms of its overpowering visuals and sound design. The technical elements do all but smother the ecological, sociopolitical critique, but it’s there in battles for the rare commodity spice, imperialist incursions affecting the native Fremen culture, and the imperial family skirmishes.

Set in the year 10191 on desert planet Arrakis where the hallucinogenic spice, crucial for interstellar travel, wafts in the air, House Atreides faces multiple crises as power plays and an attempted coup ensue. A distinguished sisterhood, ferocious sandworms, traitors, physical and emotional confrontations, ritual duels, and tests of bravery: these and much more complicate the way forward for House Atreides. Wisdom proves elusive, visions plague heir Paul, and exposition abounds in a complicated empire.

Hans Zimmer’s innovative sound design weaves its way through the entire film, at time bombastic and, at other times, subtle, even elegant. It is unfailingly resourceful with metal, bamboo flutes, whistles, drums, distorted guitars, a cello, and newly created instruments accompanied by song: Indian, Celtic, and Tuvan singing (all of this elaborated on by Darryn King in the New York Times, October 23.) Equally, technically marvelous, cinematographer Greg Fraser and production designer Patrice Vermette deliver breathtaking work, but two hours thirty-five minutes running time is demanding, even for this exceptional film.

The actors give fine performances, perfectly in character: Oscar Isaac as the ruler Duke Leto Atreides, Rebecca Ferguson as Lady Jessica, Josh Brolin, Stellan Skarsgård, and many more. The heir and principal leader will be Paul Atreides, Timothée Chalamet, the weak link who poses handsomely but fails to convey the needed malevolence.

Director Villeneuve reports that Frank Herbert’s 1965, immensely popular sci-fi novel was the bible for them. “Dune” does disappoint in its pursuit of more complex, conflicted characters, due, I suspect, to Villeneuve considering this film, its opening title “Dune Part One,” an appetizer, there to build the foundation of this world. I’m ready for the main course. As encouraged by all involved with “Dune,” THE way to experience it is in IMAX where its special effects and sound design deliver a spectacular immersion. Check listings.