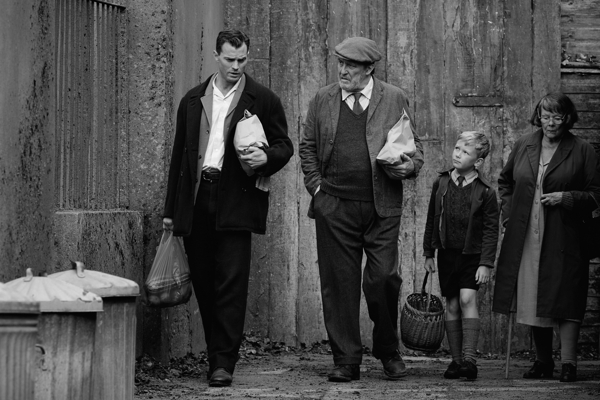 Writer/director Kenneth Branagh’s film “Belfast” is based on his first nine years growing up there as the Irish Troubles erupted in 1969. It unfolds in gorgeous black-and-white that evokes the time period, yielding to color only when the family at the center of the political conflict escapes to the cinema in this autobiographical story of politics, religion, and country.

Nine-year-old Buddy is happily playing at slaying dragons in his tight-knit Belfast neighborhood in bright sunlight when British troops attack. At a discussion session at this year’s Telluride Film Festival, Branagh describes what follows as this “happy, funny, peaceful world turned upside down by social unrest . . . suspicion and distrust replacing laughter and warmth.” He added that the cobblestones they walked on one day became part of the barricade at the end of their street the next day.

Branagh said he’s been thinking about his story for a long time, and it had to come out, “especially right now feeling the preciousness of community.” And it is Buddy’s family and neighbors who inhabit this tragically fractured neighborhood in what Branagh considered a “village city” where everyone knew someone on the bus and you couldn’t get lost. His mother had eleven siblings, his father seven. Belfast, where the Titanic was built, housed the world’s leading shipbuilders. Another Belfast native, Van Morrison, wrote a new song for “Belfast” and included eight of his previous works. As a result, the music rhythmically, melodiously captures the voice of Belfast and its moods, including one vivacious song and dance celebration featuring Buddy’s mother and father who steal the scene with contagious joy.

Caitríona Balfe plays Buddy’s mother and Jamie Dornan, another Belfast native, his father in stunning performances. Equally superb are Judi Dench as Buddy’s grandmother and Ciarán Hinds as the grandfather. As Buddy, the boy whose point of view informs every event, newcomer Jude Hill is an unself-conscious, expressive nine year old trying to absorb and accommodate the disruptive, volatile impact on his previously delightful world. Branagh choked up several times immersing himself in these memories and his “Belfast” does the same for us. Check listings.