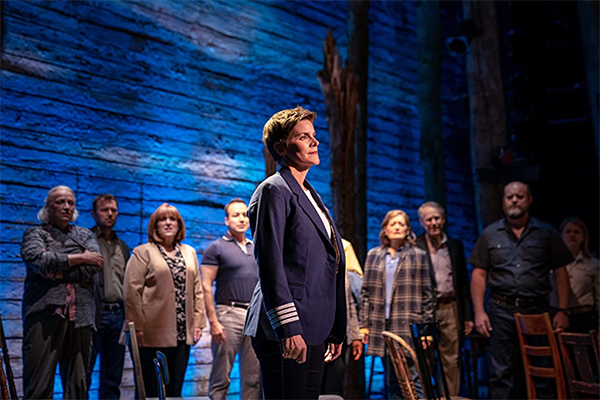 'Come from Away' records a little miracle

On September 11, thousands of Americans were massacred, and that same day, the skies shut down air traffic. Flights were forced to land. When several dropped down in Canada, a small miracle happened: 7,000 people in Gander, Newfoundland welcomed 7,000 refugees. In 2013, another little miracle took place.

Librettists saw the legend of this event. A dandy little musical called "Come from Away," a phrase for those born outside Gander, was developed at the Canadian Music Theatre Project. The musical, written by Irene Sankoff and David Hein, opened in 2015 on Broadway.

Plans were afoot to make a movie of the musical for the 20th anniversary of the event, but a pandemic got in the way. So moviemakers filmed a production at the Gerald Schoenfeld Theatre in New York City, where the Broadway musical is staged, before an audience that included survivors of the massacre and front-line workers. Via Apple+, the film streams into living rooms, serving audiences as locked down by that pandemic as those passengers were 20 years ago by that mass murder in New York and D.C. and Pennsylvania.

The result is a vibrant theatrical response to what happened in Gander. The small town had its problems -- a strike by bus drivers, for example. But Gander's over-riding spirit of hospitality and diversity responded to the influx of thousands of bewildered people -- Muslim and Christian, gay and straight, romantic and frigid. "Come from Away," the film, extends that hospitality to the stage with admirable lighting and casting, singing and dancing under the direction of Christopher Ashley, who directed the original Broadway show to a Tony.

Each member of the ensemble cast, led by members of the original Broadway show, takes on multiple roles. A scarf here, a swish or a stomp there mark shifts in character and time. Mothers are played by Petrina Bromley and Q. Smith, Jenn Colella is the pilot (her solo is especially heart-stirring), and De'Lon Grant is Bob et al.

What soars in Hain and Sankloff's book, which carries through to life after 9/11, is the philosophy behind Gander's welcome: "We honor what was lost but also what was found." "Come from Away," comes triumphantly from life to stage to stream.