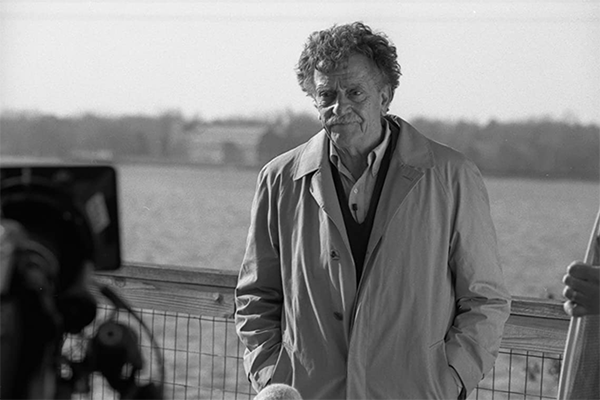 'Kurt Vonnegut: Unstuck in Time' explores the writer and the filmmaker

Of all the fine documentaries released this fall -- and there have been many -- "Kurt Vonnegut: Unstuck in Time" stands out. But it does not start out that way. The biography begins with seeming blather by writer/director/producer, Robert Weide. Weide befriended and filmed Vonnegut for 25 years, and he recorded Vonnegut's bio as his, too.

Vonnegut was the baby of his well-off Indiana family. As such, he felt called on to entertain his brother Bernard and his sister Alice. Through historical newsreels, contemporary videos, and family films, Vonnegut describes plowing through bodies bombed in Dresden, of writing ad copy for General Electric, of rejections stacked to his arm pits, of supporting his family with short stories until publication of his first novel, Player Piano, in 1952.

After that: his sister died in 1958 and his, and the Vonneguts took in Alice's four sons to raise with their three children. He divorced the loyal Jane to marry the photographer Jill Krementz (of whom little is said in the film). Vonnegut entertained on the lecture and chat show circuits, exploiting his cult figure. And, then, in 1969, Slaughterhouse-Five, his sidewise novel about Dresden, was received with great acclaim.

Weide, who has also directed "Curb Your Enthusiasm," describes his fanatical obsession with the novelist, which included archiving the papers and videos Vonnegut sent him. As the documentary proceeds, Weide mirrors some of Vonnegut's own work wherein the novelist spent more time explaining about process than product.

Weide spares nothing about Vonnegut's moodiness (PTSD?), his vanity, his humor, his teaching, and writing and writing and writing. He includes Vonnegut family films and photographs as well as images of Vonnegut's escape into art work, stand-alone as well as included in Breakfast of Champions. Weide plays audio of phone calls Vonnegut made to him and video of letters he wrote to Weide; the documentary presents interviews with Vonnegut's children and nephews, his friends, like reporter Morley Safer. Sam Waterston provides narration of Vonnegut's writing.

Stay tuned for the credits, beside which old films expand this exemplary documentary about two creative creatures.