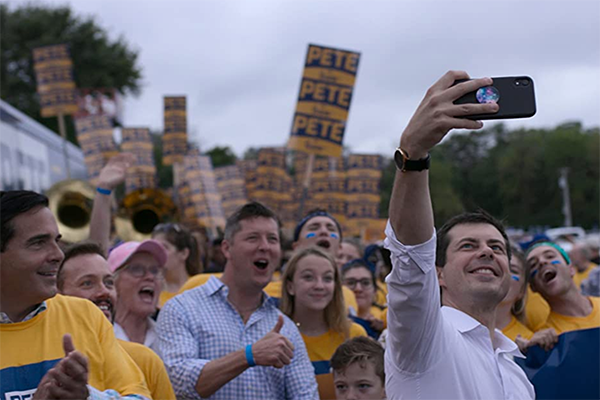 Video-recording a modern campaign for President of the President of the United States requires agility. The campaign itself, of necessity, demands consistency and, thus, repetition -- not always the making of a vibrant documentary. The filmmaker and editor have to select reportage that engages. The same for the candidates themselves.

"Mayor Pete" presents the candidate, Pete Buttigieg from beginning to end of that 2020 campaign. Instead of being the report of a man now in the White House, it is the biography of a political career in its adolescence, heading nicely toward greater success. It is about formation rather than formula from the point of view of a fly on the wall.

The phenomenon of the man known as Mayor Pete because his last name challenges pronunciation begins in the office of the mayor of South Bend, Ind. "Mayor Pete" runs in chronological order, from a CNN town hall to victory in the Iowa caucus. The crash is coming, however, without ceremony, so the documentary records that history. It also records the energy (and foul mouth) of the amazing Lis Smith, the New York operative who made a mayor into a household name. She deserves her own doc.

This one also records the story of a marriage --between Mayor Pete and his husband and chief cheerleader, Chasten Glezman Buttigieg. The hand-holding couple allowed filming as they absorbed the reality of the mayor's loss in this campaign. The camera also records Buttigieg discussing his homosexuality, the haul out of the closet, the difference that makes in the candidate's offering, and his talking points.

The latter do not make the documentary fascinating, only a record. The whole of the film makes Buttigieg real and revealing -- especially over the incident in South Bend after a white police officer shot a black man. Scenes of debate preparation -- watch Lis Smith! -- especially show the hard work of appealing to voters.

Director Jesse Moss brings to "Mayor Pete" his success with "Boys State," in which he covered a battery of boys acting like politicians in a made-up government. In that documentary and this one, Moss uses his camera and edits to tell a story about leadership, about history, about politics. It's not always scintillating, but it is always realistic as seen though Moss's lenses.

"Mayor Pete" may not always excite as a film but it does always record a year in the life of a man who wants to be President.