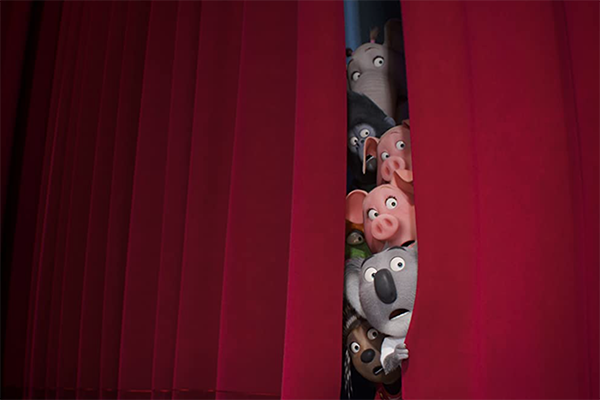 'Sing 2' delights with color and song, too

For some movie goers, it does not take much more than the promise of Matthew McConaughey voicing a koala bear to get us out of a pandemic pout and into the theater. But when you add Taron Edgerton as a gorilla, Reese Witherspoon as a pig with a dream, and Nick Offerman as her porky husband, we're in.

It does not matter that "Sing 2" extends the plot of "Sing" from 2016.  Little matters, really, and that also appeals in this all-singing, all-dancing, all-joking homage to musical theater. McConaughey's koala, Buster Moon, is an impresario. When last seen, he had saved the local theater and impresario'd a version of "Alice in Wonderland" (and, yes, that is the sound of Elton John's "Goodbye, Yellow Brick Road" -- what the heck did you expect?).

Now, Moon and his menagerie want to put his show on the road to a Vegas-like venue. They pitch the concept of an original show to a nasty backer, voiced by Bobby Cannavale, with the promise of bringing Clay (not Cab) Calloway out of retirement. Clay is voiced by Bono, who is not exploited enough, but the other voices are. That includes Garth Jennings as Miss Crawley, Moon's moon-kissing assistant.

Incidentally, Jennings wrote and directed this sequel, knowing full well he had to appeal to baser instincts and lo-klas humor. So, when Moon dries his wet hair with a hand dryer in the men's can, he comes out so blown-dry as to barely pass between the posts and lintel. Just try not to laugh at the sight. Jennings also wrote one of the great lines in movie history when Rosita appeals to her husband, "Norman, release the piglets."

Illumination Studios produces color without a skosh of subtlety but animation with nuance, such as when a mopper squeaks his way across the stage.

But it is also possible just to have fun and sing a long with the hedgehog, the meerkats, and the lemurs.