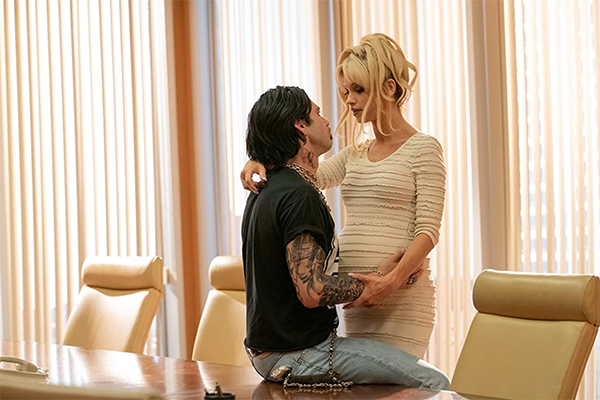 You just know that, when the voice of a protagonist's male member gets a credit in the cast list, the motion picture has the tell-tale tongue in the cheek. However, what that funky scene does not tell an audience is how uneven this particular bit of history is in eight episodes directed by four people.

"Pam and Tommy" is uneven for more than its committee of directors, led by Craig Gillespie in the director's chair for the first three. The series, based on a 2014 Rolling Stone article, attempts to cover the effects of the theft of a sex tape. The tape was made by a newlywed couple, Pamela Anderson, barely covered by a bathing-suit in "Baywatch," and Tommy Lee, amply covered in tattoos as the drummer for Mötley Crüe.

Gillespie, awfully fond of tracking shots, does not begin with the Lees but with Rand Gauthier, a carpenter working on the Lees' house. Gauthier is not stupid -- he knows the difference between a pentacle and a pentagram, but the numbskull does an unconscionable deed. As revenge for not being paid, Gauthier steals Lee's safe in which the groom has stored a sex tape with his bride.

This story also describes the embryonic internet, which served as a means for selling copies of the tape without authorization of the actors. By the time the series is over, a more plangent thread is misogyny. Anderson comes to understand that her work as a Playboy model and in "Baywatch" means, in her words, that she is labeled a "slut," worth no rights beyond having her celebrity exploited.

Lily James pulls off that poignant monologue with dignity. James, known for "Downton Abbey," turns in a respectable performance that keeps Anderson from being but a bodacious bobble-head. Sebastian Stan makes Tommy Lee almost darling because of his love for Anderson. They are ably supported by Seth Rogan as the shlubby thief and Nick Offerman as a pornographer, both men adding substance to the story.

"Pam and Tommy" negotiates a band of writers and directors. They flash back as well as shred threads of history through the Eighties and Nineties. They shed varied spotlights on sleazy producers and paparazzi, celebrities, and craven criminals. The result is bright and loud, sad and vicious, painful and stupefying. Still, "Pam and Tommy" is also worth considering as a slice of recent history and a slab of eternal misogyny.