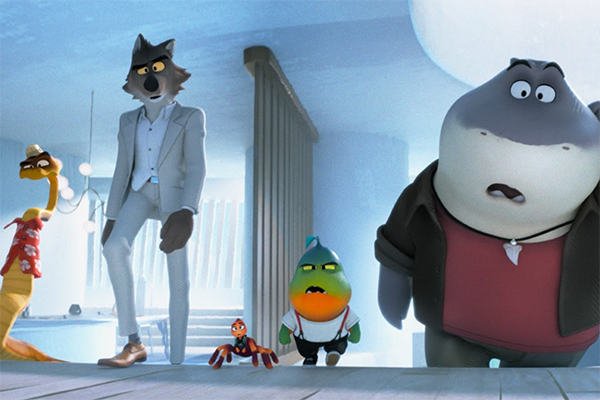 These bad guys are animals. Literally. Furthermore, these animals are animated criminals. They populate myths and cartoons, stories and metaphors. You have your charmer, Wolf, a deft pickpocket. You have Snake, a wily safe-cracker. Included in the mob are Piranha, whose fuse is short; Shark, in drag; and Tarantula, a multi-legged hacker.

They were never given a chance to be anything but second-rate criminals. When the gang is finally caught, Mr. Wolf, whose charm offensive is referred to as "the full Clooney," negotiates a deal to keep them from prison with a promise to turn good. "We may be bad," he says, "but we're so good."

The characters are voiced by Sam Rockwell, Awkwafina, Marc Maron, Craig Robinson, and Anthony Ramos with Richard Ayodade as the Professor and Alex Borstein as the police chief.

They are juxtaposed against a Good Samaritan known as Professor Marmalade, the pig, and encouraged by foxy Diane Foxington. They plan to present the Golden Dolphin to the "goodest citizen," the best of the good guys, but the bad guys plot to steal the award.

It also offers humor along with its messages about friendship and kindness. For example, when a little old lady says "good boy" to Mr. Wolf, he cannot keep his tail from wagging. "The Bad Guys," for all its noise, has its heart in the right place.

Do keep watching through the coda for a treat.