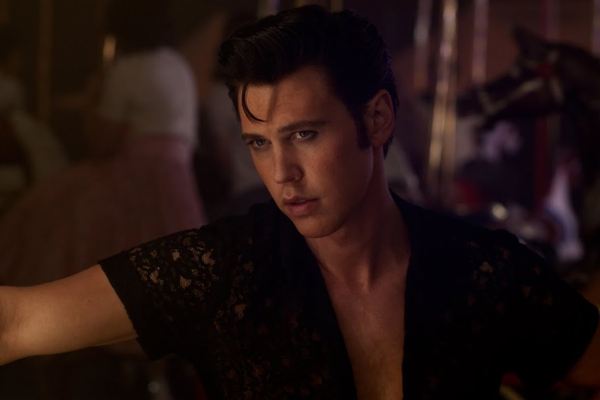 Many recent biopics of musicians have become so predictable and uninspired that announcement of “Elvis” didn’t thrill me at all. Add to that director Baz Luhrmann’s editing preferences—a cut every couple seconds—and, frankly, I cringed at the thought. And then I saw the film. Yes, it still sports Luhrmann’s somewhat frantic style, but it is creative and entertaining.

We Elvis fans know the story, so the challenge becomes how to avoid merely following this Tupelo native to Memphis and on to iconic status with his early death in 1977 at 42. Wisely, Luhrmann anchors the story in Colonel Tom Parker, Elvis’ clever, entrepreneurial manager whose voiceover narration guides and comments on their relationship and Elvis’ affect on audiences, telling their story in flashbacks. In opening scenes, Parker asserts, “Without me, there would be no Elvis Presley” and “Some people make me out to be the villain.” Indeed, ample evidence for both claims accumulates.

Through Tom Hanks’ performance, Parker dominates Elvis’ stardom and much of the film, always a voyeuristic presence, hiding his true identity and maximizing his own profits. As Elvis, Austin Butler commands the screen. Of course, no one sings with the soul seizing, mellifluous sounds of Elvis, but Butler, who does sing most of the songs, comes darn close. Moreover, he imitates Elvis’ signature, infamous, gyrating physical movement superbly.

Credit to Luhrmann for avoiding nudity and crude language, so pervasive in less inspired films today. Choices here make for better storytelling, impressively interweaving the manipulation by the Colonel, the historical/cultural context, and Elvis' talent. Moreover, the performance by Hanks, as he smiles and persuades, is even more insidious than the usual dichotomy of good vs. evil, more true-to-life and equally impactful.

Above all, the songs comment on Elvis’ emotional state without pandering or sugar coating his life. It also credits the huge debt Elvis owed to Black singers and Black church revivals, plus it notes our country’s racist, violent events. Sure, it’s all a bit too much, which is to say it’s Luhrmann. But, somehow, I think Elvis would applaud it, and that’s good entertainment. “Elvis” is playing at area cinemas.