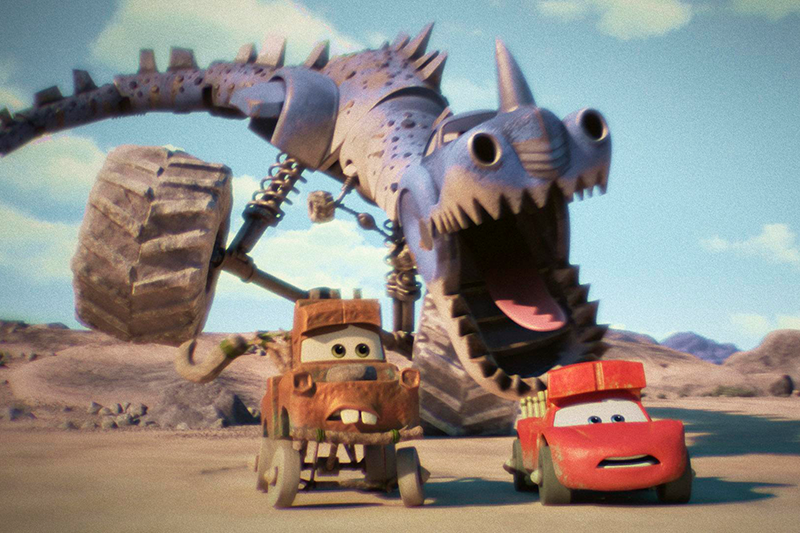 'Cars on the Road' takes a detour to a wedding

Moving on from their star turns in "Cars," that most delightful film, the animated vehicular actors, 'Mater and Lightning McQueen, head to a wedding. It takes nine episodes for the cars to arrive finally at 'Mater's home for his sister's nuptials because they have to drive from Radiator Springs to the East Coast, down south.

The episodes covering detours and bumps in the roads make for fun (very loud fun), great friendship and cute flirtations via the efforts of the Disney studios working with Pixar to create this original series.

"'Mater" is the nick-name of Tow-mater, a tomato-red tow truck. He doesn't talk about his sister much, he explains, because "she and I don't get along too well." She is, according to Mater, an "eccentric socialite," the opposite of her bro.

'Mater complains that his rusty joints tell him when rain is due and that he zones out at times. So, being a friend, the flashy Lightning offers to accompany his country bumpkin friend with the snaggle-toothed overbite.

The theme song by Jake Monaco, credited with the series' music, has the two car-panions, "hittin' the highway, just a couple of friends." Along the way, they engage in speed demonry, they hunt for Bigfoot at a campground, they circle clown cars at a circus, and they chant with trucks in a kaleidoscopic display. They exchange jibes in the script by John Lasseter and Steve Purcell, calling each other "gearshift" and "lug nut."

The script contains puns (and not the good kind) such as when Mater complains that dinner gave him gas ("not the good kind"). The movie set they barge on to is for Brakelight Pictures, a play on Searchlight. This being Disney, the script also contains a moral at the end: "The bumps along the road make life worth living."

The two main characters are voiced by Owen Wilson and Larry the Cable Guy, back from the 2006 film. Brian Fee, Bobby Podesta, and Steve Purcell direct three episodes each.

The series runs eight minutes an episode. Although the series isn't nearly so charming as the original film and nowhere near as much fun as the ride at Disneyland, it moves pretty darn slap-happily on the highway of ha-ha's.