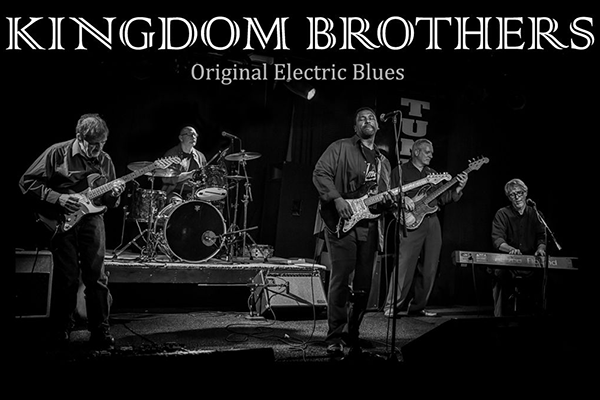 Join us on Tuesday, January 11, at 7:00 PM ct for Listen Live with Kingdom Brothers. This online event will stream live on the KDHX YouTube page at YouTube.com/KDHX with a portion also broadcasting live on 88.1FM.

"The Blues Don't Have to be Sad"

When blues veteran and Kingdom Brothers’ founder Bob Walther formed the group in 2005, he reached out to established area musicians who wanted to do something really different on the St. Louis music scene.

The group decided to concentrate on blues, R&B covers and originals that mostly have a positive message. The band demonstrates that, as the title of one of their songs states, “The Blues Don’t Have to Be Sad”.

This fresh approach was a bit risky, but has paid huge dividends for the band, attracting a large and devoted following in the St. Louis market. Kingdom Brothers were selected to represent the St. Louis Blues Society in the 2015 International Blues Challenge in Memphis, appearing in the semi-finals. The band continues to win over fans at each performance.

The band’s upcoming release, “Signs of the Times” combines original material from all the band members combined with some of their favorite covers from their performances over the years that are freshly recorded.

Kingdom Brothers has performed all through the Midwest as well as a trip to Australia in 2019, and continues to draw followers throughout the US.