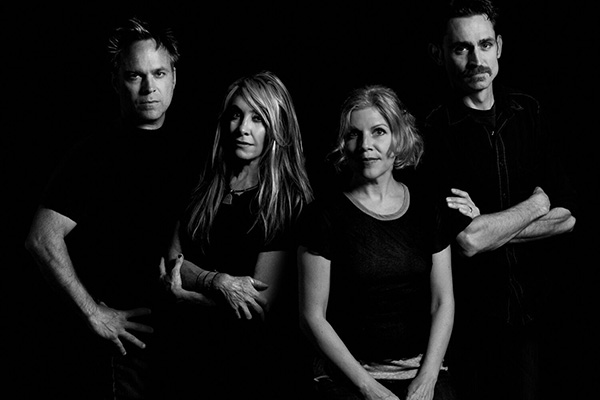 With 'Dove,' Belly Starts a New Conversation With Fans, Each Other

Before there was BuzzFeed there was the Buzz Clip, and whimsy alt-rock band Belly were among the darlings of this mid-90s phenomenon, with hits like “Gepetto,” “Feed the Tree” and “Slow Dog“ earning steady MTV rotation for their catchy yet obscure lyrics.

The New England-based band formed in 1991, when Tanya Donelly of Throwing Muses and The Breeders fame enlisted brothers Tom and Chris Gorman and schoolmate Fred Abong for the creation of 1993’s "Star." Gail Greenwood, who would later go onto join L7, eventually replaced Abong for the band’s follow-up "King," released in 1995.

The band’s 1996 dissolution was as sudden as their arrival, making this latest release of their third album, "Dove," a curiosity for cult fans everywhere. KDHX sat down with band front woman Tanya Donelly to discuss the new album and what led the band back after 23 years.

KDHX: It’s great to hear about the return of Belly and the new album "Dove." Tell me a little bit about what was on your mind when you wrote this music.

Tanya Donelly: I think most fundamentally [we were thinking of] the reunion and the fact that we were writing together, the four of us.

To be honest, there’s almost nothing on my mind when I write, and I write from a very visceral place, which sounds like I’m dodging the question. But that’s just a fact: Any of the words that come out of me are more musically triggered. It depend on what Tom [Gorman] sends me or Gail [Greenwood] sends me, or what I came up with that day, so I wouldn’t say we went into it with any agenda. It was more organically done. We sent each other what we had as we came up with it.

The band was pretty dispersed, geographically, when it began its reunion. What was that process like – picking back up with folks after 20+ years and then collaborating virtually?

Luckily geography is not a determent anymore [laughs].

It was a two-fold process. We started the writing process remotely; we sent each other scraps and then Tom sort of wove those scraps together and then we started bouncing them off and adding layers. Once we had all of the bones written — or up to a point where we were calling them written — then we got together in person and actually started to make them happen.

You’ve had a steady solo career since Belly broke up and even prior to Belly, you were associated with some pretty stately names in indie rock, including The Breeders, Throwing Muses and other artist collaborations in between. What led you all back to Belly?

The simplest answer is that when I was doing the Swan Song Series, which was a collaborative project I did a couple years back, I wrote a couple of songs with Tom and and a song with Gail and her partner and their band and so at that point we we were already writing. We were not all back together, but it kind of opened up the door for me in a way.

And then really, to be honest, we are together because Chris Gorman initiated a conversation with all of us individually. He’s the reason we all started to seriously talk about it. From that point, it was kind of, ‘Well, why not?’ It’s a funny thing. I keep saying to people, ‘This might not have happened’ and it happened because the conversations happened when we were open to it and it was possible, logistically, for all of us.

Magic, mysticism, esoteric dreams are all connotations often associated with Belly’s music. Some of that is heard in Dove, through songs like “Shiny One” and “Stars Align” and the album has a very experienced and developed sound to it – like it might resonate with your fans, where they are in their lives today, as well as represent a piece of your own lives.

We just had a conversation about this the other day. Initially, we were just going to have three or four songs and release them digitally to support the last tour. And then, as we were on the road and playing new songs, we really did feel that, ‘Wow. This is speaking to people.’

That communication and what we got back from people at the shows is entirely the reason that we decided to make an album. We felt like, ‘Well, here’s a conversation we need to pick up again. We left this conversation, right in the middle and walked out the door. Now, with this new, fleshed out life experience — which everyone in front of us that we’re playing to can completely relate to — there's absolutely a connection.

Dove is Belly’s first album in 20+ years , and I have to tell you, I keep a copy of Star in my car at all times. When people see it in the car, they seem to have a real, deep connection with the band. That Belly chose to work through PledgeMusic for its reunion album seems indicative of those connections. Tell me about the process of working with PledgeMusic. Were there any surprises or lessons learned?

Crowdfunding in general is a really positive way to connect with people. I really love the crowd funding experience — and this is something that we weren’t expecting. We were resistant. It’s uncomfortable to go with your hat in your hand and I didn’t know how it would feel. My sister Kristin [Hersh] [co-Throwing Muses] set up her own incredible co-op model, that’s been nothing but positive. She’s been hugely instrumental in the DIY movement, and she was super encouraging on that subject.

An unexpected bonus was every day you’re in touch with people who signed on. It was nice to have that connection and I like the porousness of: “Here’s what we’re doing. You’re on the front lines of it. What do you think about this? You’re a part of this and you’re included in the decision making.” That was really nice, and it breaks down the whole artist-listener boundaries, which I appreciate. That’s been the plus side of all social media. Communication has been really nice.

That’s all I have, Tanya. I enjoyed listening to your album and loved the way it kicked off, with “Mine” beginning like a quintessential first track and then every song after beginning with equally strong and unique starts.

Well, that’s another thing. [Laughs]  There’s no patience for filler anymore, which I like. Every song has to hold its own as well as part of the collection.