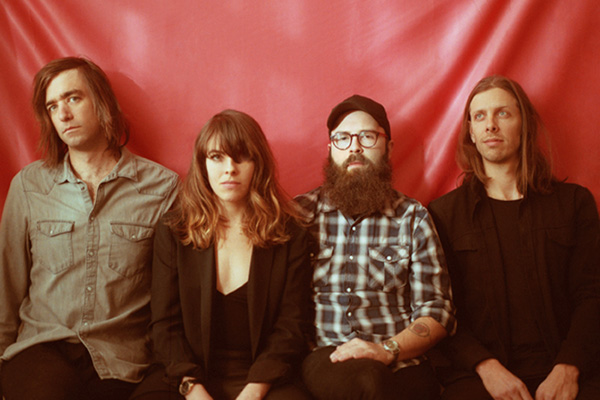 Indie folk-rockers Hop Along will be in St. Louis on Friday, June 22 at the Delmar Hall. KDHX programmer and DJ Chris Bay, host of Gold Soundz, recently caught up with Hop Along member Mark Quinlan on behalf of KDHX for a Q&A session.

KDHX: So between you and your sister Frances, who plays guitar and handles the vocal duties, your half of the band Hop Along and I reckon that you two are also the first two initial members. Can you just take us back a little bit to the origins of the band and sort of just give us an overview of everything kind of came together.

Mark Quinlan: Sure. So my sister started messing around with an acoustic guitar and you know, was doing a thing and then eventually put out this record that she recorded in our basement at my parent's house called "Freshman Year." I remember loving the record, I went to a bunch of her shows and she was fantastic. Fifty percent of the time, I would totally cry and she was great.

I was in a band at the time and I was sort of fully committed to that. So it was basically just our parents going, 'Oh, you guys should play together,' and us going, 'Yeah, they're crazy.' So my band ended up breaking up and we just kind of looked at each other and the timing was right and went, 'You want to give this a shot?' So we took it out back at my parent's house and it sounded nuts, but it was really fun and that would've been something like 2008, 2009, 2008, yeah 2008, it's been 10 years we've been playing together my sister and I.

Given the title of that record, I imagine that was freshman year of college right?

And of the two, which is the older sibling?

Oh boy, well it's me. I don't have much to show for it. I am the older sibling.

You kind of hinted at this, but it sounds like the beginning of Hop Along was the first time the two of you had really in any meaningful way, played together. Did you just kick things around, you know, being siblings around the house growing up, both being musical obviously. Was there any sort of fun being had with the instruments before Hop Along?

Nope. That's weird to think about actually, but Hop Along was it.

You know in terms of the band itself, you've been around for as you mentioned, 10 or so years and the last two records have really started to gain some momentum and seeing a lot of good press and reception and the shows are getting a little bit larger. The last time you were in town, you played at Off Broadway, a little smaller venue than the Delmar Hall venue.

Quite a few years there of just kind of getting things going and keeping it going and working hard and just kind of keeping your head down. What was it like for the first five to seven years before you started to see things grow in a significant way? Being a band, it's pretty hard for a lot of folks starting out right?

Well we grew up in the punk scene. So we just thought that was how music worked, it was just punk. You slept on floors, you played basements and that's just sort of how it was, and if you weren't doing that, you were rock stars and that's just kind of how it looked to me.

I can't necessarily speak to Frances, but we just figured it was just networking and sleeping on couches and playing basements and that's just how music works.

I want to talk a little bit about the band's songwriting process. But I think about what's kind of unique to Hop Along. I think that Frances, she's a great songwriter and has particularly interesting voice. That's one of the things that's written about the most. But beyond that, I think so many people don't talk about often is the way her vocals interplay with the arrangements and the rest of what the band is doing. I think that there's generally a really tight synchronicity between what the rest of the band is doing and Frances's vocal parts and I'm just kind of curious how that all comes together as you're writing a song.

So if Frances comes to us with an idea, we'll all give our first impression of how we can best individually represent what her idea is, and she'll hear us and sort of see where we want to go. And we'll kind of just all talk about it as we continue on with the arrangement until one feels like we're representing the song in the best way and that really takes a different amount of time for every song.

Texas Funeral was extremely quick, insofar as the normal length that our writing process is and there were other songs which just took forever and changed multiple, multiple times. But it's always rewarding, writing with these guys, I love them, so that helps make the process very real.

When you get hung up on a song like that, maybe hung up isn't even the right word, but a song that in process, takes long. When a song tends to take longer in the process, what are the kinds of things you might be struggling with? If you have a specific example that would be great as well.

Sure let's see. Well sometimes if something comes to us and someone feels like it's really pretty far out of the wheelhouse of their level of understanding or the skill that they're able to bring, it can be frustrating and kind of complicated. But again, other band members if they have a very clear vision of like what could happen here, we'll sort of walk you through it until you're able to make it your own.

I can't, let's see, there were a few songs that definitely got hung up on and changed multiple times until there was something completely different. But I am definitely having a hard time thinking of which song that was in particular. Oh you know what, Somewhere A Judge became something very different than it was initially. We tracked something and listened to it and just went, this isn't going to play right and it just ended up being this whole different track when Bark Your Head Off Dog came out, yeah that was a big one.

What was to compare to the album cut that's track two on "Bark Your Head Off Dog," just kind of in a broad stroke, what did that initial demo or initial take sound like?

The course was much more bombastic. There wasn't really any four on the floor going on. The verse was similar but there was truly a stark sonic contrast between the verses and the courses that I don't feel like really complimented each other. It was few people playing over other people as well because we couldn't really figure out some of us, myself included, where exactly we fit in, in the song, but it turned into maybe my favorite song to play live, top three.

Nice, that's really cool. Let's talk a little bit about the recording process for this new record. From prior interviews I've gathered that the band decided consciously to spend a lot more time in the studio than you did for the second album, "Painted Shut." What was the sort of reason for that and what did you get out of that additional studio time spent on "Bark Your Head Off Dog?"

Well, we wanted to have some extra time to really work on the little things and the details and like just have a week-and-a-half to just throw darts at the board and see what stuck, because that is a lot of the time, what gives songs their charm and character, is just that weird thing that's poking out and making it, its own. So having that ability to lay down a strong backbone for a song that we felt really was a great canvas and then sort of splash paint all over it like in a Jackson Pollock kind of way.

Sometimes with more direction than that. Sometimes with less, but having the ability to play with color and tone in different instruments, was what we really wanted to do in making this record.

That's cool. Yeah, you can definitely hear that in a lot of the tracks. I think there's definitely sort of, a wider sonic palate. A little bit more polished production though, not sort of over-polished if I can put it that way, but a great sounding record overall.

Yeah, absolutely, thank you, appreciate that Chris. Yeah the last record ended up ... We had a producer on it who is great as an engineer, that producer was also the engineer and he is amazing and really knows his craft and knows his art. I'm talking about Johnny Gallo and we just very much had to adhere to John's wisdom and knowledge and you can tell sonically, it sounds like it which is awesome, I'm very proud of that record.

I wanted to sort of share a personal anecdote. This is going to sound less like an interview question and more like something you'd probably hear at the merch table, but back when "Painted Shut" came out, that was the first I had heard of the band and our music director here put a copy of the album in my inbox. He kind of tends to know what I'll like and he said, 'Hey, check this out, I think you're going to be into it.'

Sure enough I was, I put it on a mix tape, I put "Waitress" actually on a mix tape for a two-week long summer road trip in between jobs and I sort of like just sort of like really seared it into my brain. Every time I hear that song, I think about sort of driving through northern Missouri and Iowa and Illinois and all the places that I was at on that road trip and in particular, there's a photo I ended up taking of a waitress in a rural diner that just kind of when I hear that, that track, that's just the image that pops into my head.

I imagine given this sort of visual range and this sort of deep lyrical nature of the songs, you probably hear stories like that from time to time, right? Do fans kind of tend to relay their own personal experiences to you out on the road?

One of my favorite things about being in this band is people seem to, not everyone, but a lot of people that come to our shows and listen to our music, intimately and personally connect with the records in, a unique way and yeah, a lot of the time they'll tell us exactly the experience that made certain songs click for them or the experience that was enhanced by Frances's lyrics or the particular songs.

Yeah, we all love that. Being able to affect anyone in a meaningful, positive way, feels very good.

Thanks again Mark for taking some time to talk to us here. Once again, been chatting with Mark Quinlan, drummer for the band Hop Along. The band's brand new record is entitled "Bark Your Head Off Dog." It's out now on Saddle Creek Records and they'll be in town at Delmar Hall on June 22.