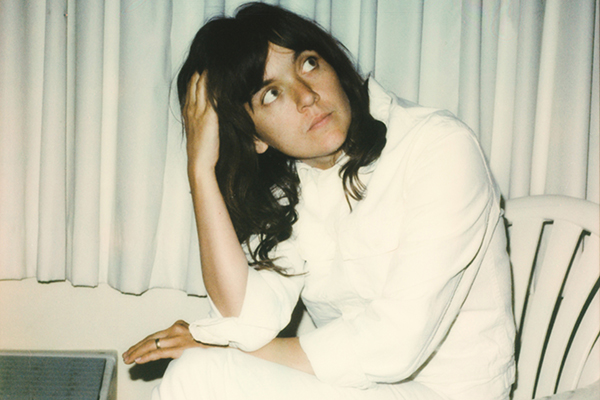 Tell me how you really feel, Courtney Barnett

How does Courtney Barnett really feel? On a recent Tuesday in St. Louis, the answer would be, “Hot and tired, but happy to be here.”

She and her band were in St. Louis from her native Australia to perform a sold-out show at the Pageant, featuring Barnett’s unique brand of songwriting and indie rock. Currently, they are touring in support of her second full-length album, “Tell Me How You Really Feel.”

Her previous efforts include: a full length album “Sometimes I Sit and Think, And Sometimes I Just Sit” in 2015, a collaborative album with Kurt Vile “Lotta Sea Lice” in 2017, plus EPs, “I’ve Gotta Friend Called Emily Ferris” in 2012, “How to Carve a Carrot into a Rose” in 2013 and “The Double EP: A Sea of Split Peas” also in 2013. She was nominated for a Grammy for Best New Artist of the Year 2016 and won Breakthrough Artist of the Year 2015 by the Australian Recording Industry Association.

“We had a bit of a day off yesterday,” yawns Barnett a few hours before her St. Louis performance. “But I was so hot and tired; I just kind of sat around. [I] haven’t had that much time off, so once I sat down I couldn’t really move.” They did enjoy some “great Syrian food” in the neighborhood and even met some fans on Delmar. “It was a good vibe. The people I met have driven from, like, kind of far away to come.”

While some artists greatly prefer writing, recording or touring, Barnett says she sees the value in each and seeks balance. “They all have their pros and cons, I guess, like everything. You get bored or tired of one thing. I’m always trying to mix things up a bit.

“Also, [in the U.S.] there are so many places to tour. You can be playing a new place every day. Australia’s quite big and more spread out, so it’s not as easy.”

Barnett enjoys exploring the cities and regions of the U.S. “Everywhere has it’s own vibe. Even towns within states within American can vary so much.”

The current political climate has actually yielded an interesting result, she observes. “… I think I’ve noticed, amidst all the anger, sadness and frustration, people are almost, like, more willing to be more open and more vulnerable and more passionate. It’s kind of like finding a positive in a negative situation.”

Barnett’s new album gives voice to some of the sadness and frustration she sees. In “Namess, Faceless” she sings,

“I wanna walk through the park in the dark

Men are scared that women will laugh at them

I wanna walk through the park in the dark

Women are scared that men will kill them

I hold my keys

The song, she explains, is about “Being angry and upset about … women being constantly killed and in situations like that. And that kind of frustaration and anger that when things like that happen, women are told they shouldn’t be walking alone or shouldn’t be wearing that or shouldn’t be so drunk. Instead of focusing on the real problem. There’s so much in that song to unpack. But the main thing, the underlying theme, is the hatred and misogyny and how it can transcend from anonymous, online, seemingly harmless verbal abuse and how it can kind creep up to physical, real life violence – rape, murder. The distance between the two is not that far.”

Social media is “a toxic place,” says Barnett, who says she uses it far less than she once did. “For lots of reasons, one of them is that I just can’t be bothered.”

Barnett continues to write new songs and is open to collaborations, though she doesn’t want to “jinx” opportunities by talking about them. “I’ve been writing heaps, but with no real project in mind. I just write until I think of something.”

She prefers to write songs herself and then share them with her band when they are ready to record. “I kind of leave it until the last minute a bit to finish them. I don’t like showing people unfinished songs. So it’s a bit of slow process, I think. But also I like the fresh energy of people still discovering how to play something. It’s a fine line between being unprepared and being fresh.”

She doesn’t have a specific process, “Always different. Always so different. I think they just marry up at different times. I like mix and match until things work together. I don’t really follow a formula. Just trying to make it interesting for me and for anyone listening. Just trying different things.”

“The people I play with are so in tune with me and each other – I’m so lucky in that regard – they just know kind of exactly what I’m hearing already. And sometimes we muck around until it becomes a new thing. A lot of these songs, I had an idea of what the drums or the bass line – and I showed them that and we kind of built it together. Or it just kind of organically appeared. I’ve been playing with the same people for a long time. I think I’ve been really lucky.”

Barnett is also an entrepreneur. She founded Milk! Records, an independent record label based in Melbourne in 2012. “My Grandmother gave money for my first EP. I drew a record label logo and I put it on the back so it looked serious. And then I did a small business course and started a label. And it’s grown into this really great thing. It’s artist run. Just a really great community of musicians and artists and it’s really inspiring to be part of.”

Outside of music, Barnett also enjoys drawing and photography. “Mostly portrait stuff. Nothing really serious. I just kind of like documenting things.”

She also reads memoirs. “I tend to read a lot of memoirs ... It’s maybe a bit voyeuristic. You get an insight into other people’s minds and lives and kind of hear their secrets and opinions. And also feeling how other people deal with things and their struggles and how they overcome stuff, all of that is interesting.”

Following the U.S. tour, Barnett and her band will tour Australia, “which will be fun because we haven’t played there for a while.” Playing back home is a bit more nerve-inducing. “Especially in Melbourne with friends and family, it’s always a bit intimidating. There’s something about being on the other side of the world where it doesn’t feel as real.”

Be sure to check out the concert review of Courtney Barnett's show at the Pageant by KDHX writer Annah Bender.