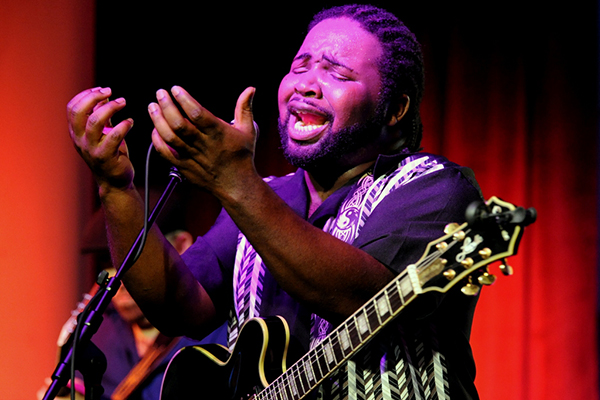 Marquise Knox: 'I’m a good man. I’m a poor man. But I’m a bluesman. Do you understand?'

KDHX presents Marquise Knox: Live From The Listening Room at The Stage, sponsored by the Big Muddy Blues Festival, on Sunday, August 5 at 8 p.m. A portion of the show will broadcast live on air on "Nothin' But The Blues" with Ron Edwards.

When the 14-year-old Marquise Knox exited BB's Jazz, Blues and Soups stage at the Baby Blues Showcase the audience screamed for more. The 2005 performance announced to St. Louis that a prodigy had arrived. Over the next decade, mentored by the best of the old delta bluesmen, Knox would hone his musical, songwriting and stage skills while surrounding himself with some of the best musicians in town. Now, at age 27, the prodigy days are over. The fully formed bluesman has arrived.

Knox first learned the guitar under duress when his 3rd grade teacher, seeing his air guitar, asked him to play for a school black history project. He said yes but he didn’t know how to play. When he asked his grandmother, Lillie May Knox, for help she got upset because he had lied to his teacher. Then she and her brother Clifford William, got their guitars out and set out to teach him the music they grew up with in their Grenada, Miss sharecropping family. It is a family with deep southern roots going back to enslavement in North Carolina and New Orleans, La.

Middle school music and 9th grade sousaphone gave way to Knox’s uncanny ear and ability to sing and play guitar way beyond his years. He got noticed at age 11 in a local guitar center by mimicking older musicians. By 13, leading local blues figures like Billy Barnett and Skeet Rogers were inviting him to sit in. There were dinners his grandmother and great uncle Clifford would take him to, to meet local delta bluesmen like Boo Boo Davis and Big George Brock.

Knox smiles when reminiscing about becoming Brock’s guitarist: “We found out Big George was from Grenada, too. He and my grandma began swapping stories and names and it turned out we were kin. I was young. He told me ‘you call and I will take you all over the place.’ And, he did.”

Regular trips to Grenada to visit family and meet bluesmen resulted in his playing with Honeyboy Edwards, Pinetop Perkins, Louisiana Red, Hubert Sumlin and many more. Sumlin once told Knox, “You've got tone, Marquise. Something that's your own. Don't ever lose that.” Knox absorbed other lessons too. “I learned from Big George and Henry Townsend not so much music, but more to stay dedicated to the music and not let the older history of the struggle, the blackness, die out.” It’s a promise he’s worked to keep.

A meeting in Clarksdale, Miss. at age 16 with Sam Lay led him to Chad Kassem and Saline, Kan. to play at the celebrated "Bluesmasters at the Crossroads," series. A record deal led to recording his first CD, “Manchild,” with Michael Burkes at Blue Heaven Studios. The 2009 release won the Living Blues' Best Debut Artist Award and a BMA nomination for Best Debut Artist. A direct to disc album came at the next Crossroads followed by another album, “Here I Am,” in 2011.

Knox was barely 20-years-old with two critically acclaimed albums. His band was coming together and he was opening for one of his heroes, B.B. King. It was pretty heavy stuff for a kid barely out of his teens. Then life happened. Knox would not record another album for five years.

“I got the sense of what was going on," Knox said. "People kept telling me how young I was. I was raising my own kids. I wanted to figure out how to do this. Some people didn’t have my best interest at heart. I didn’t stop playing, but I didn’t feel the need to record until it finally hit. I didn’t want to always be working for someone else. I needed to figure it out.”

One step was a move to the country in 2012 to be with the love of his life, Angie Shepard. It got him back to the land where he could relax, raise his kids, plant a garden, barbecue, work on his music and pursue his interests in history, politics, community and kids. He kept up his Blues in the Schools work and he serves as board chair for the nonprofit, The Center for Artistic Expression.

The final pieces of his band also came together. By 2011, Matt Lawder, a highly regarded guitarist and band leader and Michael Battle, a seasoned drummer, were in place.  In 2013 he recruited one of his heroes, bassist Gus Thornton, who brought the licks and gravitas of having played with the very best (Albert King, Stevie Ray Vaughn, Katie Webster, Bobby Bland). His cool calm demeanor completed the puzzle.

This tight professional outfit became a brotherhood. Battle loves the way “we know each other’s moves, gestures, signs, needs.” Thornton admires Knox’s growth: “He’s become an even stronger player. He’s more confident in building a rapport with the audience and allowing them to become part of the show. He’s a band leader not a dictator.”  It’s a leadership role Knox takes seriously.

“As a band leader, there's a few things I don't do," Knox explains. "The main thing being I never travel without my guys. Your band has to make a living just like you do, so the worst thing you could do is put your band on the backburner.”

Knox’s performance skills are apparent the moment he sings or wields his early 80s Gibson 335 or Special 20 and Marine band blues harps. He will even take on a keyboard if one is available.

“He’s an old soul in a young body,” according to bandmate Matt Lawder. “Originally, B.B. King may have been his main influence, but you can hear pieces of everyone else – John Lee Hooker, Lightnin Hopkins, Elmore James, Robert Johnson, Honey Boy Edwards, Henry Townsend – all wrapped up in his own style. I never thought I would get to play with an old blues guy like Albert King, Buddy Guy or B.B. King, but now I am.”

It’s the songwriting skills that amaze his bandmates the most. While recording, “Here I Am,” Battle was astonished by Knox’s ability “to create songs, words and music on the fly,” just like is mentor, Henry Townsend. Lawder thinks Knox writes a kind of R&B and southern soul that he hasn’t heard since Johnny Taylor and Tyrone Davis.

A 2015 trip to Argentina had a profound effect on Knox. “I saw a side of poverty that I had never seen, even though it can be found here in America too. I saw makeshift homes made out of boards and cardboard and kids running down the street playing. I realized that to those kids everything was normal, but to those passing by, we knew how bad things were. It was at that moment I saw I needed to use my music to talk about the pain and my voice as an instrument of peace and concern.”

To speak out he has taken to live streaming on Facebook from his home, guitar in hand, to share music and his views. He draws inspiration from The Rev. William Barber, whose belief in a common moral duty led to his building the racially diverse Moral Mondays Movement in North Carolina.

Knox says he sees being engaged and voting as critical to social change. "Put people in office that talk about Medicare for all. This don't help just black people. I live in Bowling Green, Missouri. Most of the folks there are white and poor. They need help. That's the blues."

Knox also uses pointed humor to draw attention to issues like social inequality and generational wealth: "Black folks ain't did nothin' but pass down a funeral bill, a sweet tea recipe and a fried chicken recipe. You all pass down hundreds of thousands of dollars and homes to your kids. That’s the blues."

At the February 2107 Race and Blues dialogue series sponsored by the St. Louis Blues Society and KDHX, he spoke directly to the issues of heritage and societal issues that are alive and well today. “You have to talk about [the] real condition of black people. You can't separate the history of black folks from the blues," he said. "Too many speak about the blues like it’s just music. The blues is the oral story of black existence in this nation.”

He encourages white artists to invest in and learn about the history and culture. Knox acknowledges that being outspoken may be off-putting to some folks in the music industry. But, as Lawder observed, “He feels it’s important to grow awareness. He is a beacon for a better life, trying to lift up his people and the roots of his music.  It’s who he is. A bluesman.”

A Bluesman in Charge

Meeting National Endowment for the Arts Heritage Fellowship recipient and Grammy Award-winner Henry James Townsend and his youngest son, Alonzo, was providential. At 13-years-old Knox became family, coming over on weekends to play music and eat dinner. Henry encouraged the boys’ relationship telling his son, "Every blue moon there is a person who is heads and shoulders above the rest. They are special, golden and given tools that can take them around the world and build bridges. Very few others can attempt to do what they can do.”  He told the boys to “stay tight and help each other.”

When Knox was ready to make his move in 2017, Alonzo Townsend was there. They are co-CEO’s in Knox Entertainment LLC. The 30-year-old Townsend brought management experience and music connections. Their vision began with Knox having control over his destiny with his own label.

Times are good with regular gigs in town at BB’s Jazz, Blues and Soups, Beale on Broadway, Broadway Oyster Bar and the National Blues Museum and travel dates. Scheduled tours took him to Europe in July and plans for South America in November. Knox will headline the Big Muddy Blues Festival on Labor Day weekend on the St. Louis waterfront and play the National Folk Festival September 7-9 in Maryland. Then there are the plans for a new album in the fall. And, the music world has noticed with "Living Blues" (10/17), and the June 2018 issues of "Big City Rhythm" and "Blues and Ebony" magazines all featuring Knox.

It has been an amazing ride with multiple European tours and Blues Cruises, playing with legends and opening for B.B. King. However, there was one night in 2016 Knox calls a career highlight. He opened for ZZ Top and spent time with member Billy Gibbons. Knox recalls Gibbons telling him: “Marquise, a lot of people think we play the blues. We play around it, at best we might emulate the sound. But you, you're young, can captivate an audience and you're black. You embody the essence of what the blues is all about."

Gibbons observations are confirmed by Knox’s 2017 independent release of a live performance at the 2016 Bowlful of Blues Fest in Newton, Iowa. “Black and Blue” is a testament to Knox’s style, skills and maturation as an entertainer. It showcases what his fans know best – the sweat, grit, power, originality, versatility, humor and emotion of his live performances.

There are two songs on the CD that really capture the essence of Knox. The first is when he asks and answers the question with a B.B. King-style "Can a Young Man Play the Blues." It’s the next track, "Bluesman," that completes the circle. It has become Knox's signature song.

It is a joy to watch the one-time prodigy pour out his soul as he sings this song, his story. As it unfolds, he will leave the stage without a microphone greeting fans, belting out verses and filling the room with his powerful voice. It’s when you get to the chorus that it all comes together.