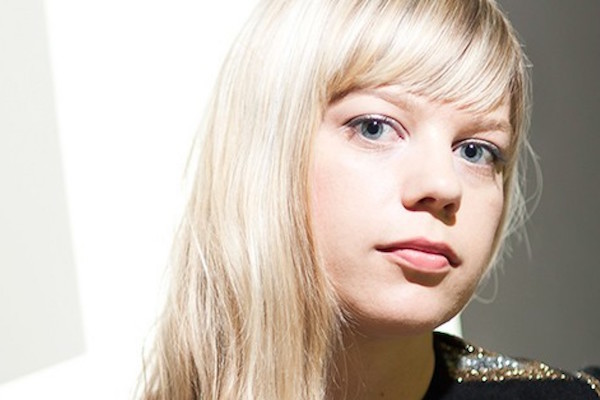 'It felt like coming home this time around': An Interview with Basia Bulat

"Day or night, friendly or fight, doesn't feel right to me." These are the opening words to Basia Bulat's new album, and they set the tone for all that follows. Good Advice, the fourth LP by the Canadian artist, is a compelling collection that reflects on the ways we struggle with the end of a romantic relationship: self-deception, emptiness, internal conflict, and the difficulty of redefining oneself in its wake. It's also a major sonic shift from her previous work, with rich and resonant keyboards largely replacing the string-centric foundation -- acoustic guitar, autoharp, charango -- of her previous records.

While the content of the songs on Good Advice is rooted in personal experience for Bulat, her presentation has a universality that will resonate with anybody that's struggled with falling out of love. And while these topics certainly aren't unique in the world of popular music, her songs shake loose the facade of the breakup album canon, presenting something neither bitter nor hopeful, but rather beautifully honest.

In advance of her performance at Off Broadway on March 12 -- a show welcomed by 88.1 KDHX -- I spoke to Bulat about Good Advice, including the album's production, which was led by My Morning Jacket frontman Jim James.

Chris Bay: We're really looking forward to having you back in St. Louis. I guess it's a little over a week away.

Basia Bulat: I know! I'm excited to come back! Thanks for the [KDHX studio session] last time, it was really cool, and thanks for playing my music.

Chris: Of course, we love the new record. I was trying to remember the last time you were here. If I'm not mistaken, it was back in July with Tallest Man on Earth at the Pageant, right?

Chris: That was a great show. I think that was actually on my birthday, or a day or two either side, if not. And I seem to recall that you received a standing ovation at the end of your opening set, which is pretty rare for that venue.

Basia: I think it's pretty rare in general, to see that in an opening slot, it was magical. And of course, [Tallest Man on Earth frontman] Kristian's band are such nice, good people. Hopefully I've poached a couple of them.

Chris: Let's talk a little bit about the record. Can we call this a "breakup record"? Is that a valid characterization?

Basia: Some people are calling it that. It's an all-kinds-of-things record. Yeah, I think some people that liked it, I think that's the exciting story. But everything I want to say about that is on the record already.

Chris: That's fair. The making of the record is another key storyline, with Jim James doing the production. How did that relationship come about?

Basia: I gave him my record backstage at Austin City Limits years ago, my second album. And we'd run into each other off and on since he invited me to open a week of shows on his solo album tour, which was amazing, and we became friends over time. So I asked him if he'd be interested, because he's somebody I'd always dreamed of collaborating with in some way, and I wondered if he'd be interested in producing this record. So I sent him a couple of songs and he said, when can you come down to Louisville?

Chris: Did you have the songs wholly written and demoed when you went down? What state were they in when you arrived in Louisville to record?

Basia: I sent demoes to everybody before I went down there. We knew with the time that we had, it was just easier, and I had most of them written. It was a good idea to have something demoed.

Chris: That being said, they don't really sound much like the demos, so that's kind of cool, that they were able to live in different worlds, and grow into different kinds of beings on record than what they were when I first wrote them.

Basia: There are some key differences from your previous work, too. One that I wanted to pick out was the instrumentation. Autoharp, ukulele, charango, these  have become hallmarks of your previous records, something that people identify with your sound. And those are pretty much absent, if I'm not mistaken, from this record entirely.

Chris: Well, you don't really realize what instrument's what, and that's kind of the cool part, that you can really play around with the sonic capabilities of each instrument. So they're definitely there, but it's definitely gone from a very documentary type of process -- like my early records are real documents of what's happening in the room -- to how can we kind of blend that documentary aspect that I really like, because I like the energy with those recordings, but I want to be able to play with the sounds in the studio.

Basia: It's kind of funny, especially in America, people like talking about the autoharp and the ukulele, but my first instrument is the piano. I've played piano my whole life. So playing keyboard and piano [on the new record] is kind of like coming home for me. I've avoided it as my main instrument for many years, for numerous reasons, but it felt like coming home this time around.

Chris: The autoharp is a foreign instrument for a lot of folks. Was it more common for you growing up?

Basia: No, I didn't grow up with it at all. I picked it up pretty much right when I made my first record. My neighbor was selling it at a yard sale. It wasn't something that I grew up with in the least. I grew up with a very classical music background; my mom was a piano teacher. So maybe that's something that I really liked about it. And I know that something I really liked about it is that there are a lot of ladies that play the autoharp. I saw all these amazing performances of Dolly Parton and Maybelle Carter and Joan Baez, great women singers and songwriters who I admire. I love the tradition behind the autoharp in that respect, for sure.

Chris: It's pretty easy, and kind of lazy, for people writing about new records to talk about the producer as if they're the person steering the ship, and their thumbprint defines record, but it's a collaborative process, obviously. Going into the studio with Jim for the first time, what was the working dynamic?

Basia: We're friends, and it's always fun to record with your friends. We were all on the same wavelength. I went down to try it out just for a few days, to see at first how we worked together. We thought maybe that would be best, maybe if I come down for a couple of days and see what we could come up with. So I drove down to Louisville and I went into the studio. Jim was playing bass, I was playing keyboards, our friend Dave was playing drums, and we quickly recorded "Time," almost exactly the way it is on the record. We barely changed or added anything to it from that first day. Though we added some strings at the end.

It really just felt like we had something, we were all on the same wavelength, something was fully formed coming out of what we were doing in the room.  That's kind of what I mean, we still had this element of capturing live performance because we were recording first onto tape, and then we would play around a lot with different things. I was playing all of the keyboards, so then we would play around with keyboard sounds. But at the end of the day, a lot of it was happening live.

Chris: Taking the songs out of the studio with different players than are on the record, are they going to sound different? Is the goal to mimic the recordings?

Basia: You want it to be a little bit of both. You want to capture the energy of the record without karaoking to yourself, hopefully. I'm bringing the same keyboard -- I played this one keyboard from the '70s all over the record -- so we're lugging that beast around with us to all of the shows, which is pretty fun.

Chris: Some people, myself included, hear this record as a significant step in a different direction from what we've heard previously from you. Does it feel like that to you, or does it feel like more of a natural evolution?

Check out this video from Basia Bulat's in-studio performance at KHDX.