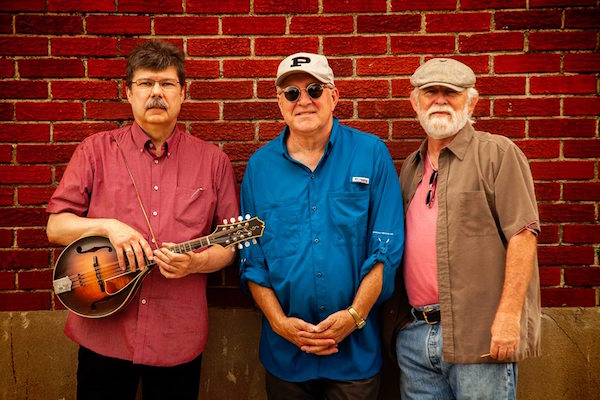 It was 45 years ago this autumn that a group of skinny, hairy, hippie musicians convened at a funky little nightclub in Springfield, Missouri called the New Bijou Theatre. It was a songwriters collective at the time rather than a band on a mission. But on the strength of the songs, a heady blend of country, Americana, rock and pop, the Ozark Mountain Daredevils found themselves recording in London just 18 months later with uber-producer Glyn Johns (The Who, Rolling Stones, Beatles) and enjoying a fruitful association with A&M Records that lasted the rest of the 70s.

Two of the original Daredevils -- Randle Chowning and Larry Lee -- along with Ozark bluegrass veteran David Wilson perform at the Focal Point on Friday, November 11. The set is a mix of choice cuts from their Daredevil days and more recent material that Chowning and Lee have composed and recorded together under the name Beyond Reach. The trio is nearing the conclusion of a three-month run of acoustic shows in the Midwest. Multi-instrumentalist Wilson, who has recorded and toured nationally with the Undergrass Boys and Radio Flyer, provides many of the solo dynamics as Chowning and Lee sing their timeless songs.

In an interview with me last year, Randle Chowning reflected on "If You Wanna Get to Heaven," the Dares' first hit. The song was composed by Steve Cash and John Dillon but true to the communal spirit of the band, lead vocals were handed over to Chowning. In the spring of 1974, the country-rocker about getting to heaven by raising hell was all over FM radio.

"There's always a chance, any given chance at any time that with the right song you can knife right through what is going on. That is an exciting thing. Because you see it come out of nowhere," said Chowning.

"It's like watching a little bird being hatched and it flies off and it's pretty incredible -- 'Jackie Blue' and 'If You Wanna Get to Heaven' and some other songs we got radio airplay on -- to see them go from nowhere, to first learn them and figure them out and contribute a part to them, to see that go through the recording process and then actually go out and be heard by people all over the country. It's an incredible process to watch something go from zero."

"Jackie Blue," from the Dares' sophomore album, rocketed up the charts in early 1975. Larry Lee's sumptuous and soulful croon about a melancholy woman ("everyday in your indigo eyes I see the sun set but I don't see it rise") was matched with Chowning's memorable slide guitar and an entrancing rhythm.

After a decade in the Ozark Mountain Daredevils, Lee moved to Nashville, Tennessee and enjoyed success as a songwriter and producer. In the mid-1980s, he toured with Jimmy Buffett's Coral Reefer Band playing acoustic guitar and singing background vocals, and during this time he began collaborating with fellow Coral Reefer Josh Leo. The two went on to work on numerous projects together in in Nashville in the 1980s and 90s. Lee produced albums for Alabama, Juice Newton, Restless Heart, Earl Thomas Conley, Jon Goin, the Remingtons and others. He returned to the Ozarks in the mid-2000s, working with Chowning in Beyond Reach and self-producing the albums Twigs and Buds on Branches under his full name Larry Michael Lee.

Lee sings about half of the numbers in the trio's live set including "Within Without," "Spaceship Orion" and "You Know Like I Know" as well as the riveting, meditative "You Don't Need It" from Beyond Reach.

Commercially, though, nothing in Lee's career has compared to the impact of "Jackie Blue." The song is in the rarefied Million-Air club with BMI certifying over one million airplays by 1985.

Lee isn't often seen in concert. But for the first two decades of his career, he was on the road regularly. This year marks 50 years since a memorable tour with Lewie & the 7 Days for whom Lee played drums. The band had cut a couple of Northern soul singles for the Springfield-based Skipper label and were a hot ticket.

Lee recalled, "Between what would have been my freshman year and my sophomore year, Si Siman, a local music publisher, promoter and our mentor, asked us if we wanted to go on a USO tour. We thought, hell yeah, anything to get us out of town. Si then contacted the State Department and the USO, probably sending them a press kit along with one of the records we'd done for Si's Skipper Records label. The State Department ended up picked us to go, of all places, to Vietnam.

"So off we went in the summer of 1966 for a three week tour of military outposts in South Vietnam. We were flown around in C-130's and helicopters to the un-godliest hellholes I'd ever seen, where we'd set up our gear and play songs like the Impressions' 'Woman's Got Soul' and James Brown's 'Papa's Got A Brand New Bag.' We played to all these guys who were mostly around my age and who constantly told me all they wanted to do was just to make it back home. The last place they took us was to perform at a field hospital. It was horrible. I saw guys my age with no arms, no legs, heads wrapped up in bandages to the point you couldn't even see their eyes. Almost every one of them said, 'Man, do whatever you have to do not come back here.'

"I hadn't yet enrolled in my sophomore year, and as soon as I got back from that USO tour, I had an induction notice to go get my physical. It was the time of the draft and after just getting back from Vietnam and talking to everybody over there, I told myself I wasn't going to take a chance with what the draft and the Army might give me, and instead I would rather join some other military service for four years and stay the hell away from there. So I ended up joining the Navy in the fall 1966 for a four years stint away from my family, my girlfriend and my band."

Randle Chowning's career has been a winding, looping affair as well. He left the Daredevils in 1976, cut a solo record and, though he was busy songwriting and publishing, he dropped off the discographical map for many years. Since the mid-2000s Chowning has collaborated with Larry Lee in Beyond Reach, yielding two CDs and an EP; additionally, he's released self-produced work under his own name, as RC & the Keys and, most recently, as Ozark Joe.

Chowning calls Ozark Joe his "mountain folk" persona and has released Bottle Tree (2015) and Dancing on Cobwebs (2016). He memorably struck that musical vein in the Daredevils with songs like "Leatherwood," which appeared on The Car Over the Lake Album (1975).

Leatherwood is a place name, explained Chowning, a few miles from his childhood home of Mountain View, Missouri, and it's also a botanical name.

"Leatherwood is a shrub or wild plant. It's not a tree. It's a low-growing shrub that grows in the valleys of the Ozarks. It was used by the Indians to weave baskets and stuff, so it's a real supple type of bark. I'm not sure that if I went out in the forest that I could say, oh that's one right there. I have an idea of what it looks like; it's not terribly common, but Indians made baskets out of leatherwood. You can strip the bark and use it to weave.

"The Leatherwood that I'm talking about is a creek that runs into the Jack's Fork and the Jack's Fork runs into the Current down on the National Scenic Riverways and around Mountain View and Eminence, which is where I'm originally from. We used to deer hunt down there. My father and my uncles took me down there every fall, and there was a Leatherwood Creek in that area. If you look on the maps, you'll find the name. It's a name that you will find that will pop up in the mountainous areas. You'll find it in Arkansas; there's a Leatherwood Lake right outside of Eureka Springs.

"That was the inspiration for the song. It's a very different kind of country song; it's I guess you could say an avant-garde country song in a way. I was working on that before I put the Daredevils together."

In addition to "Leatherwood," Chowning wrote and sang other cherished songs in the Daredevils canon such as "Country Girl" and "Road to Glory," all of which the trio can be expected to perform at the Focal Point.

Daredevils fans will especially appreciate the wistful "My Old Band" from Beyond Reach's self-titled 2005 album in which Chowning sings,