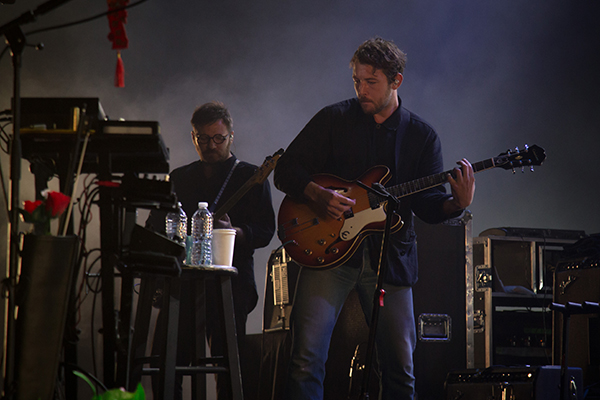 Fleet Foxes Long-Awaited Comeback Focuses On The Past

Fleet Foxes brought their beautifully ethereal vocal harmonies and indie/folk rock sound to Peabody Opera House on Tuesday. Their most recent album, “Crack-Up”, was released last year after a six year hiatus. Early in the set they played, “I Am All That I Need/ Arroyo Seco/ Thumbprint Scar”, the first track on their aforementioned album. It’s complex, experimental and quite long with movements sounding like different songs entirely. It starts quietly with just frontman Robin Pecknold unaccompanied; then the band comes in fast and fills the room with a big intricately layered sound. The deeply personal lyrics are accentuated by abruptly changing dynamics and rhythms throughout. This song is representative of the subversive qualities that can be found in Fleet Foxes new material. It’s a departure from the charming radio-friendly folk/pop we’re used to and promises the band has staying-power and won’t stagnate like others in this genre.

We heard several songs from the ambitious, “Crack-Up”, but the setlist was heavily focused on older material playing the majority of music from their 2008 and 2011 albums. This choice makes me wonder if it to please the audience, who as a whole will always enjoy hearing the songs they’re most familiar with; or is this the music the artist prefers. Either way, the crowd was on their feet for their most well known songs including “Mykonos”, “Blue Ridge Mountains” and “White Winter Hymnal” which are shamelessly addictive with just the right amount of whimsy. Much of their sound can be attributed to their transcendental harmony. Pecknold’s voice seems to multiply; even when he’s singing alone he’s harmonizing with his guitar and the result is reminiscent of a church choir.

It seemed as if everyone in the band played no fewer than three instruments. The musical ability being showcased was especially apparent with Morgan Henderson who plays upright bass, guitar, flute, bass clarinet, violin, percussion and euphonium just no name a few. Their sound is full and balanced; without looking on stage you might assume there are more than six musicians. Being that Fleet Foxes are vocally and lyrically focused and use a wide variety of instruments, it was very satisfying to be able to hear all of the layers of strings, keys, percussion, brass and woodwinds and still be able to distinguish all of the lyrics. I imagine that isn’t an easy task for the sound board.

For their encore they played my favorite track from “Crack-Up,” the stripped-down, sufficiently sentimental, “If You Need To Keep Time On Me.” In comparison to the rest of their music, this song is pretty simple yet evokes such emotion, which speaks to Pecknold’s songwriting ability. They ended the evening with crowd favorite, “Helplessness Blues,” a song from their sophomore album with all the makings of a millennial anthem. “I was raised up believing I was somehow unique/ Like a snowflake distinct among snowflakes, unique in each way you can see/ And now after some thinking, I'd say I'd rather be/ A functioning cog in some great machinery serving something beyond me.” It’s definitely a fun one to sing along to, even though the tone is a little less than sunny.

This show has undoubtedly made a fan out of me, being a person that was previously just familiar with the singles from their first album. I know I’m in good company hoping they don’t wait another six years before releasing their next album.

Head over to our Flickr page to see the full set of photos from the night by Monica Mileur. 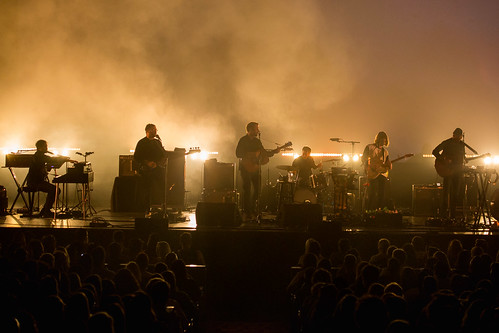