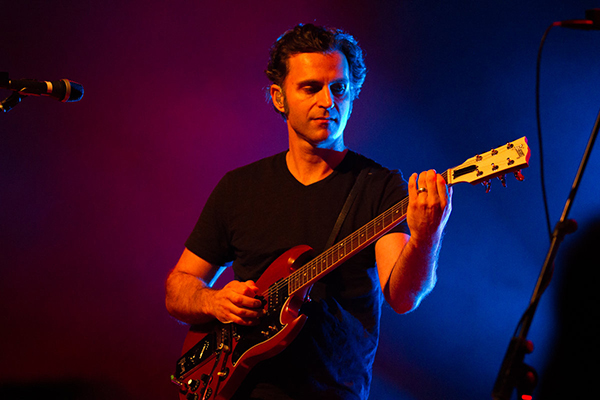 I came to the Zappa party a bit later than others – in my late 20s or so. I wasn't raised on Zappa, but knew him primarily as the guy with the mustache and eyebrows who hates Tipper Gore and censorship and sings about eating yellow snow. I didn't have that context of continuity, seeing Dweezil transition from soloing alongside his father to leading the band to elaborating on the existing catalog. I missed the creative and intellectual contributions he has made and assumed he was cruising on the coattails of his father's brilliance. So I'll admit, I came to this show a bit of a skeptic. I was expecting not to like him, to validate my criticism, and never have to wonder again if I was missing out on something.

Dispelling any and all reservations, Dweezil led his band through three and a half hours of Zappa glory, performing a selection of "Choice Cuts," not just in the songs selected, but in the riffs and variations overlaid to create a setlist of greatest versions, rather than greatest hits at the Ready Room on May 8. Dweezil was a font of information on his selections – which live performance, album version, studio version, singer, and musician made the cut and contributed to this conglomeration of ideal types. He smiled faintly start to finish and never broke a sweat – not a single bead of perspiration to be seen! – as he coolly played like at peace with the world.

Though he stood front and center, he was no glory hog, taking his turn to solo, occasionally introducing a song or explaining the background. On his few vocal contributions, his voice smacked of his father's, making the continuity even more convincing. Instead, the spotlight was spread pretty evenly across the stage, with recognition for each members' vital contribution, reproducing the democratic style I had witnessed in fuzzy old videos of The Mothers of Invention live performances.

The newest additions to the band seemed so in their element I couldn't imagine the life without them. Cian Coey was a fireball with a chameleon's pipes. She pulled off everything from the hyperactive growl on "Fifty-Fifty" to the crooning of "Doreen," wound up in jaunty pigtails like a soulful Muppet in on Jolt cola. Adam Minkoff contributed another bulk of vocals, filling the role of Johnny “Guitar” Watson and piercing glass on the encore "Oh, In the Sky" and handled rhythm guitar as well as a brief moment on flute, accompanying Scheila Gonzalez, a multi-instrumentalist wonder. Keys, sax, flute, clarinet, impersonations, she did it all, including a rough but hilarious hybrid impression of Johnny “Guitar” Cartman.

Everyone was on, 100% of the time: involved, engaged, assisting, dancing, mouthing along if not singing. It felt like a beautiful, joyful collective of talent and enthusiasm. The only break in the pace came when technical difficulties plagued Chris Norton’s ability to synthesize sound on his computer. As Gonzalez pointed out from behind another set of keys, "You have no idea how much weight he pulls back there to bring the music to you!" and for a moment all were concerned that the show might not go on – or might go on but in an “analog version.” The misfortune was our good fortune, as we were lucky recipients of a bonus "Apostrophe" courtesy of Dweezil, Kurt Morgan driving on bass and Ryan Brown, the drummer who never stopped, thanks to “The Black Page” #1 & #2.

They worked out the technical bugs and launched directly into "Po-Jama People" and "Call Any Vegetable," complete with all the hallmarks of Zappa stage banter, tailored to the location: "Where can I go to get my jeans embroidered in Jennings? Where can I go to get the runs in University City?" In general, the cleverer, punnier dialogue detours are my least favorite Zappa moments, preferring instead the jazzier, gritter, scuzzy guitar side. But when delivered live onstage, the interplay onstage made even the goofiest punctilious toaster jokes more enjoyable than just tolerable. I enjoyed every single, nonstop action moment of the evening, shrieking at the opening notes of one of my favorites, "Dirty Love" and basking in the requisite yet glorious "Peaches en Regalia."

What else did I expect from a man who has made a life of perfectly executing catalog of intricate, avant-garde, experimental compositions? I think I expected smugness. Or pompousness. Bad on me. What I got was joy, affection and dedication to breathing new life into decades’ worth of genius. I reveled along with the rest of the older, nerdier hippie crowd, for no less than three-and-a-half hours of relentless music geeks energetically picking up and putting down the choicest cuts of truly legendary musical material. I’m sorry I ever doubted you, Dweezil, and I thank you for making me a believer.