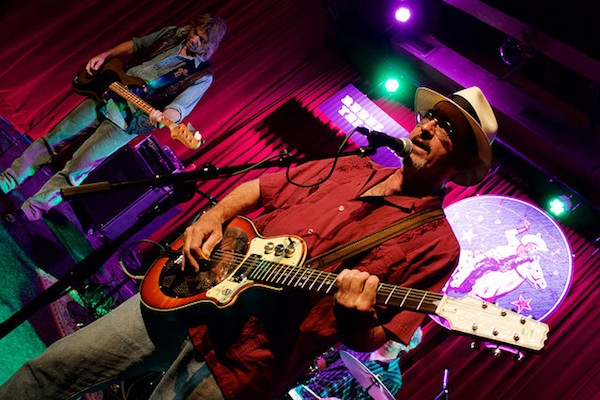 Twangfest 20: A review of night one with James McMurtry, Wussy and the Vondrukes, June 8, 2016

I made my way across the river to the first night of Twangfest 20 headlined by James McMurtry, Wussy and the Vondrukes at Off Broadway. As the sun slowly made its decline and nestled itself behind the St. Louis skyline I made a promise to myself not to repeat the adventures of last year. When the night ended I found myself with one, maybe two, more drinks than I could handle. I slurred my words with proficiency to members of Lydia Loveless' band while my counterpart that evening disappeared on the dark streets outside Off Broadway. There is a certain magic that happens when the crew Twangfest takes over the venue that makes it hard to daintily sip a pint of beer and shot of bourbon.

It was a beautiful night on the patio, a perfect calm before the heat and humidity overtakes the city and inside St. Louis' own the Vondrukes took the stage. The body heat from the audience crept into the room and it seemed that the beginnings of summer was upon us. The band seamlessly weaved Neil Young influenced riffs, the Tex-Mex of Calexico, pure unadulterated 60s garage rock, Cowpunk and 70s funk influenced rock à la the James Gang into a cohesive set that staked out their sonic territory. The soaring trumpet Justin Ellis made me question what flavor spirit was residing in my hand. They marched through the set with a rhythm section of Jeff Griswold on bass, guitarist Jason Kettler, additional keyboards provided by Ellis and drummer James Baker. Rhythmically they navigated a range of styles and tempos leaving riff-meister Bob McKee to dig his guitar some where between the heaviness of Tony Iommi and Neil Young. A key component to the Vondrukes is the lead vocals of both Griswold and McKee that when harmonizing with Allison Williamson gave each song a little extra piece of ear candy.

The audience made their way outside for some fresh air and whatever poison they decided to indulge in. Another pint of beer and some of Kentucky’s finest was quickly paid for. I stared at each drink remembering the promise I made on that 20 minute drive across the river and in that time a wash of sound erupted from the stage as Cleveland natives Wussy made their presence known to the Twangfest crowd. A wash of sonic textures from clean angular riffs and distorted echoes bellowed over the propulsive back beat of drummer Joe Klug and the ecstatic bouncing of bassist Mark Messerly. The room started to get a bit warmer in the sea of their sonic textures and that pint of beer tasted better with every sip. The dueling vocals and guitars of Chuck Cleaver and Lisa Walker was a sweet and sour mix doused with John Erhardt's pedal steel and guitar which at times sounded like he dragged them through the vortex of hell and back. “I want to thank KDHX for playing our music,” announced Messerly with pure delight while the rest of the band was genuinely happy that the crowd allowed them to blast their sonic pop experiments with songs like “Teenage Wasteland,” “To the Lightening, “Halloween” and “Hello I'm a Ghost.”

It took a few moments to catch my bearings from the sonic assault of Wussy and outside, in the fresh air, my ears, almost, returned to normal. I could hear the clanking of the band getting set up and a brief sound check which was my cue, one more drink. Just one more and I would cut myself off for the night. I took my spot at the back of the venue as McMurtry and boys cranked into the first song. The sold out crowd and opening grooves from Bayou Tortous brought some Texas heat from these Austin based cats. Instead of strumming an acoustic guitar McMurtry lit up his electric guitar and laid into each song while drummer Daren Hess and bassist Cornbread gave each song a propulsion exceeding it's studio counterpart. It was just a glimpse into the midnight rambles they hold at the Continental Club in Austin.

That familiar humidity of summer from this river city crept into the club, each sip tasted a little bit better than the last but soon I forgot I even had a drink in my hand. McMurtry's cool demeanor made him appear as a musical card shark which kept the crowd in the palm of his hand and on edge for the next song. The set progressed with “Just Us Kids” to “How'm I Gonna Find You Now” where guitarist Tim Holt turned the trio into a quartet, as McMurtry would state, “He (Holt) joins us as he pleases.” Along with adding guitar counterpoint, Holt also lent a multi-instrumental prowess to the set playing accordion on songs like “Copper Canteen” and “You Got Me.” McMurtry shocked the crowd with “Choctaw Bingo” in the middle of the set, a song that has become a signature, but instead of draining the crowd of energy, the unspoken question was “What's next?” He slowed the tempo taking the stage solo for “These Things I've Come to Know,” which became a study in musical tease bringing the audience up, down and then flooring them through the encore with the title cut from his first album Too Long in the Wasteland.

The house lights went up and everyone filtered to the patio or their cars. It was the first night of McMurtry's tour and fitting that it was also the first night of Twangfest. It was a night of sonic pleasure kicked off by the Vondrukes to the auditory wash of Wussy and capped off by one of the poets of Americana, James McMurtry. Out on the patio I felt the cool breeze wash over me with the urge to have just one more. To complete the night by sitting back, looking to the sky and comprehending the musical pleasures the night held. No, I had a 20 minute drive across the river and an alarm clock set for 5 A.M.