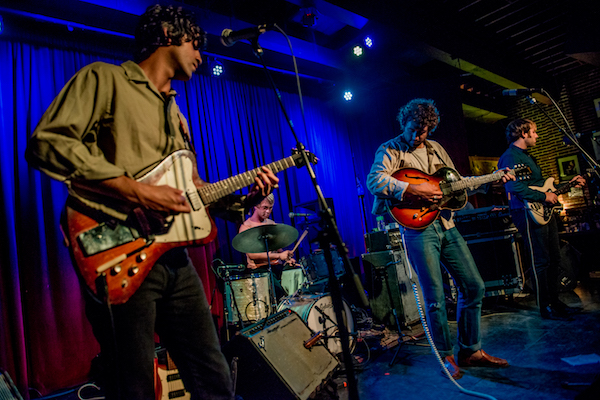 Allah-Las' odes to LA underbelly resonate with Off Broadway crowd

The Allah-Las are a band of sun-kissed boys, at times a little pleased with themselves, who nonetheless create beautiful pop melodies that wash over your body like so much Pacific surf. They are described, or perhaps pigeonholed, as a group of like-minded mates with shared interests in vintage California rock and have drawn comparisons to the Zombies and the Kinks. If that's their schtick, then it's working for them: a large and enthusiastic crowd gathered at Off Broadway on a rainy Friday evening to sway and sweat as the four-piece band (plus a touring keyboardist) rolled through a set blending old and new material in support of their 2016 release, Calico Review. Although the average song length was probably the classic three minutes, the mood seemed unhurried, even languid. The band treated us to an extended intro to the first song, a wordless garage rock jam that could have just been five guys in a living room warming up. When the tune changed course to become "Tell Me (What's On Your Mind)," loud applause swelled into the rafters. Vocalist/guitarist Miles Michaud broke a string, and the band played on -- more impromptu instrumentals as he made hasty repairs, this time a swinging little number complementing the clinking glass, laughter, and background noise of a crowd anxious to hear more. All fixed up, we were swept right into "Follow You Down," immediately followed by "Busman's Holiday," a ballad overlooked from 2012's Worship the Sun -- rollicking drum fills call to mind the crest and fall of waves on a beach, while guitarist Pedum Siadatian's nimble flourishes punctuate an otherwise bass-driven contemplation.

Between songs, there was little banter -- Michaud flashed a few warm smiles in appreciation of the crowd, but onstage interaction or antics were nonexistent. However, the members' own contributions to songwriting were showcased through the sharing of lead vocals. Nearly everyone got a turn at the mic, from Siadatian on "Catalina" to drummer Matthew Correia on several, including "Long Journey" during the encore, delivered with a gravelly, almost menacing sneer while double-fisting a set of maracas. Even bassist Spencer Dunham got in on the action with "200 South La Brea." The changes in song structure and styling, reflective of each member's personal touch, were subtle. Despite this general mood -- lazy harmonies, similar chord progressions with a few inventive licks, the set never felt repetitive -- a testament to some serious songwriting chops underneath that throwback LA surf label. These guys are paying homage, but with a twist.

The set picked up speed toward the end, with crowd favorite "Catamaran" and a two-song encore, during which Michaud picked up some steam, lurching up and down at his microphone, wailing away at a tambourine which he then wore as a hat on his way off the stage. As the crowd filed out to smoke and buy records by the dozens, I was struck by the dissonance between the (mostly) restrained, almost dreamlike set and the upbeat crowd. Allah-Las write songs that are almost wistful in their acknowledgment of LA's grim undercurrent, the daily shattering of dreams in a city where everyone wants to shine bright. It's a world seemingly far removed from the Cherokee Street Historic District, where the main concern of Off Broadway staff sometimes seems getting people to quit parking off President Street. Yet the timeless (that word!) melodies, a backdrop against which odes to pretty girls and lost dreams are sung, seemed to resonate with us all. With every record, Allah-Las improve musically and the sunnier their sound, the darker their lyrics. Their live show, grittier than recordings, brought out that dissonance. 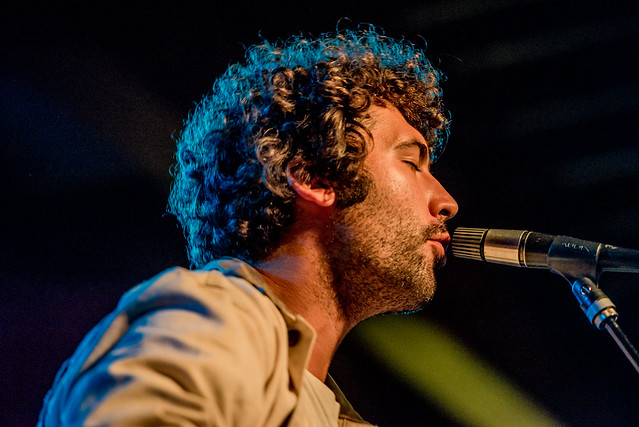