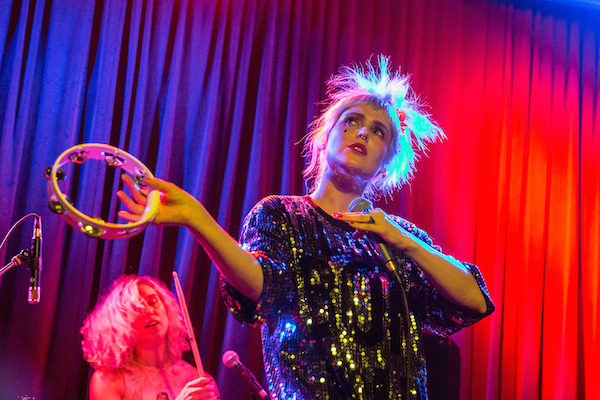 Tacocat, Daddy Issues, and Baby, Baby Dance with Me at Off Broadway, October 7

Okay, so hang with me for a minute here. On Aesop Rock's most recent album, The Impossible Kid, the exasperatingly brilliant song "Shrunk" catalogues the rapper's thoughts on therapy -- from filling out forms to the discomfort of the waiting room to the eventual encounter with a psychologist, whose professional training and appeal to objectivity contrasts wildly with Aesop's inventive view of the world: "She said, 'When you start getting all expressive and symbolic / it's impossible to actualize an honest diagnostic.'"

This is my problem when it comes to writing concert reviews. What begins with a well-meaning attempt to document and disseminate the most salient aspects of a show ends with a kind of soul-searchingly obsessive deliberation that infests my intellectual life. Like a mom (okay, my mom) who entreats her son to "try to have fun" as he sets out for school, football practice, or a friend's house, I remind myself every time to try to write a review: Who played? Was it good? When they roll back through St. Louis, should your reader "be sure not to miss it"?

Instead, what churns inside me when I sit down to write is the something more akin to the "expressive and symbolic." I can't help but feel that I have a kind of cosmic responsibility to the show, regardless of whether it was good or bad, boring or breathtaking. If we believe that art cannot help but affect us in some way, however infinitesimal, then I cannot help myself from taking this imperative to an unnecessary extreme, like I owe it to the world to bear witness to whatever in me is changed.

I'm neither proud of this nor holding myself up as a paragon of review-writing. If anything, I feel like kind of a total tool, having already exhausted 303 words without even mentioning any of the bands. (I've also already cut out a semi-serious exegesis of the phrase "try to have fun," which was clocking it at an extra 114 words.)

What happened, though, was that last Friday night, the band Daddy Issues -- whom I'd neither heard before, nor even heard of -- became my new favorite band. It came to me verbatim, in words, "This is my new favorite band," as though I was incanting something holy. This being 2016, I also immediately tweeted it, offhandedly and without really interrogating the thought. What I realized, though, over the course of another song or two, was that Daddy Issues had somehow always been my favorite new band. But I didn't know what this meant, or why I felt this way.

Before we get to that, though, here are some of the review-type things that are apparently so hard for me to make happen. Local garage rockers Baby, Baby Dance with Me opened the show (which was at Off Broadway, which I mention in spite of my all but innate ability to withhold basic information from the reader). Baby, Baby Dance with Me's music is driven by a decidedly vintage vibe, and I expect that over time they will eventually become more than equal to the sum of their parts. For the moment, though -- or at least to me -- it felt like I was listening to someone flip through a really cool, somewhat eclectic, occasionally bizarre record collection: Velvet Underground, Jonathan Richman, the Jon Spencer Blues Explosion, the soundtrack to The Addams Family, a little Johnny Cash, a bunch of 1960s stuff that seemed familiar without my having to put a finger on it.

Between bands, I saw two people sprawled over a couple of chairs in a corner of the mezzanine. They were lightly dozing in one another's arms, it seemed, and I envied their comfort -- the ease with which they inhabited the world, moving fluidly between states of being. (I'm straying from review-type stuff here, I know, but the moment was too beatific to go unremarked.)

The Seattle-based four-piece Tacocat headlined the show, and they are easily the best surf-infused, feminism-fueled punk band with a palindromic name since Emily's Sassy Lime. Tacocat write fun, smart songs with a wry incredulity. Like a cheerleading squad sneaking Julia Kristeva into their routine, Tacocat's sunny disposition belies the dark comedy of their lyrics, which often take aim at positions of privilege and the ignorance of those who inhabit them. "Men Explain Things to Me," for example, distills mansplaining down to its most basic bullshit: "You're in my way / Every day." Tech bros flooding into Seattle on corporate shore leave populate "I Hate the Weekend." "Time Pirate" comes down hard on anyone who doesn't know when to shut up.

The straightforwardness of Tacocat's songs is perhaps their greatest strength. After a few listens, though, it's hard not to tend to "get it," which makes their live show a study in the importance of stage banter. Introducing "You Can't Fire Me, I Quit," the band members riffed off one another to expound upon the its theme; singer Emily Nokes summarized the song's perverse, antagonistic logic of a rejected lover who pleads "take me back, so I can dump you," which bassist Bree McKenna annotated as "very mature." Although their live presence was hardly as theatrical, anarchic, or exuberant as one might expect from the visual aesthetic of their social media or album art (to say nothing of the very nearly viral video for "Crimson Wave"), their set was solid and enjoyable. It was actually cool to be reminded that when a band plays well, their music can simply be their music.

Here, though, is where the whole thing becomes a problem for me. If I can explain what I didn't like about Baby, Baby Dance with Me (overly influenced) and what I did like about Tacocat (progressive fun), then why is it so hard to simply say what was so totally flooring to me about the band in between them, Daddy Issues? Because, seriously, it's been days now that I've been thinking about this. Why has it taken so long to say? Why risk jeopardizing the very relevance of a concert review (to say nothing of straight up abusing a reader's patience) in order to continue agonizing about this; to play and replay the CD-R that I bought from them at the show (yeah, they sell burned CDs); to feel inarticulate and weird and dumb; to try to write the experience off as ineffable while at the same time literally writing about it; to have all but focused myself singularly to this task, with the exception of going to work and occasionally working my way through Luke Cage while I eat dinner; to admit to you (are you still here?) just how long this has taken to write; to almost want to apologize to the band themselves for being as moved as I was by their music?

Because honestly I'm worried that I'm wrong. Worried that they weren't as good as I think they were. If anything, on paper, it may not look like much. Daddy Issues are a three-piece band from Nashville who met during college and seem only newly out of it, if not still outright enrolled. They are young women whose music is a kind of resurrected grunge, reminding you just how much melody had been hiding in the noise of the 1990s. They sound like a cross between Nirvana and Belly, if that makes sense. Simple song structures, unflashy arrangements. Cool, you can tell, but not too cool.

The lyrics of singer/guitarist Jenna Moynihan have a kind of brutal, beautiful obviousness, but they are delivered almost dispassionately, like she is singing a police report. "I'm a creepy girl / and I'm in love with you," she intones on "Creepy Girl," one of their most striking songs: "I don't know what I'm doing / because I'm in love with you." There are a number of songs about crushes on their debut album, Can We Still Hang (Infinity Cat Recordings, 2015), which arrive at a real intimacy through their plain, un-retouched quality, as though on loan from a diary. On "Blue Haired Boy," Moynihan reveals the relatively low-stakes lengths to which she seeks attention from the other ("Blue haired boy, you better notice me / Went and dyed my hair pink"). On "Veronica," her infatuation with Winona Ryder's character in Heathers aspires to what seem like pretty reasonable goals ("We're gonna hang out / We're gonna make out").

But there's an undeniable darkness here too, articulating the converse of the crush. On "The Bruise," an unnerving presence leads to self-destructive excesses: "I took something / because you're in the room / keeping your distance / I tried to eat around the bruise." Another song, "Ugly When I Cry," achieves its stunning affect through an unrepentant clarity:

I hate girls on TV
They're much prettier than me
I have low self-esteem
It's easy to be a mess when you're debris.

This seems pretty real to me, pretty bare. Unimpeachable. And yet one finds little wisdom-beyond-their-years here or any of the "old soul" bullshit that too often refers to a friend who is more quiet than you are. Rather, this darkness is not only their darkness but everyone's darkness. It happens all the time and at every stage of your life and you can't stop it and it's really hard to talk about in all but the most obscenely direct way. I suppose I love how easy it seems for Daddy Issues to be that direct, as in they didn't need the million words to get there that I need to get here.

Musically, the guitar, bass, and drums fit perfectly by not fitting. There is a certain steadiness to their songs, forsaking the dramatic highs and lows that one might expect of the subject matter, residing instead in a more neutral middle -- the place where truth, if it exists, can usually be found. The songs usually stick to two or three chords, occupying and owning them. Above all, Daddy Issues play every song like they are playing it for the first time -- newly, with interest and curiosity, a little afraid, excited, proud, unselfconsciously, in love with what didn't exist until right now.

When I say, then, that Daddy Issues have somehow always been my new favorite band, this is what I mean: that they are once honest and expressive, bridging what could easily be an impasse; that they articulate what I (we) have surely always felt; and that their urgency, however reserved, is deeply connected to creativity as such.

Click below for Dustin Winter's photography coverage of the evening. 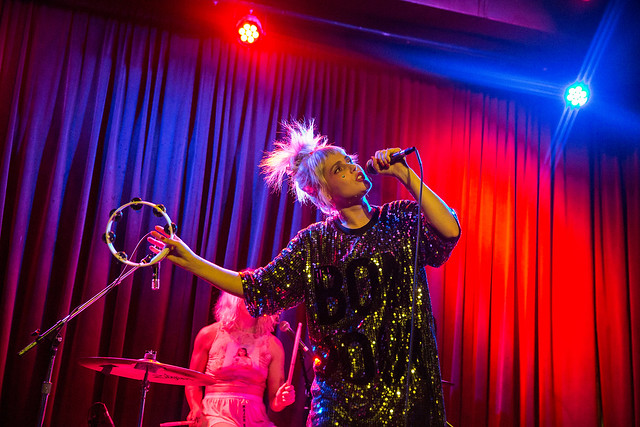