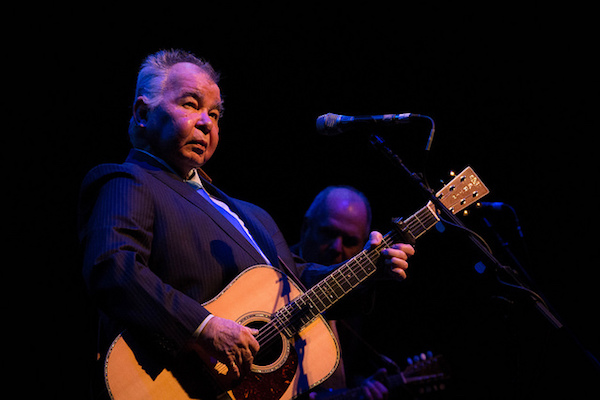 The night opened with Lubbock-born singer and violinist Amanda Shires, who has become a staple in the Nashville music scene. She was accompanied on guitar by her husband Jason Isbell, who played The Peabody last February to a nearly sold-out audience. Shires voice, sweet and little with a distinct tremulous quality, complimented her fiddle playing nicely. In between songs, she told stories of times that she's played with John Prine in St. Louis over the years, which revealed the singer's light-hearted side. Once at the Touhill she got him to wear a sock monkey onesie on stage, which was so distracting that it affected her performance, although she still offered him $50 to wear it again tonight. Before "Mineral Wells" she explained that she's obligated to play the song because it's the only one of hers that Prine likes. After observing his demeanor and playfulness throughout the evening I still doubt that statement is true, but I'm sure he said it. During the instrumental breaks in each song Shires walked toward her husband and they looked into each others eyes while playing. The harmony of their interactions reinforces the unisonous melodies of their music. For their last song Isbell joined her on vocals for Warren Zevon's, "Mutineer," a beautiful song also covered by Bob Dylan. By the time Shires introduced the headliner as, "Our hero and yours too, John Prine," the room had already been warmed by his presence.

John Prine is a legend and one of the most influential songwriters of his generation with a massive catalog that boasts a wide variety of genres and themes. His songs are poetry that evokes real emotions from his audience. Some make you burst with laughter, like "Your Flag Decal Won't Get you into Heaven Anymore." Some cause uncontrollable dancing-in-your-seat, toe-tapping and singing along like "Grandpa was a Carpenter." And some lyrics cut deep and cause chills once the reality settles in, like "Sam Stone," which was the most demanded of the night.

The crowd last Friday was energetic to say the least, as if every person in attendance was the president of a chapter of the John Prine fan club. It was incredible to witness such love and admiration for an artist who has relatively flown under the radar for most of their career. After every song a handful of people in the crowd would yell out requests of their favorite songs. At one point Prine gave in with good humor, "Well, I better play this one next, cause it sounds like that guy is double parked."

At the halfway point of the show Prine welcomed special guest vocalist Iris DeMent to the stage for three songs they recorded together in 1999 for the duets album In Spite of Ourselves including the renowned title track, as well as their single "Who's Gonna Take the Garbage Out?" from John's 2016 duets album For Better, Or Worse. DeMent has an unmistakably charming, sunny voice that is reminiscent of Loretta Lynn with just the right amount of twang. Her delivery paired with Prine's gravelly voice makes for especially delightful contrast and their set was certainly a highlight of the concert. And of course the crowd was sure to join in on the line, "There's no Riviera, in Festus, Missour-ah" from the song "(We're Not) The Jet Set" originally recorded by George Jones and Tammy Wynette.

Prine introduced his song, "Hello in There" by talking about his grandparents. He spent a lot of time with them as a child and said he had such an affinity for the elderly that he hoped to grow up someday to be one himself, which made the crowd laugh before he went on to deliver that most heartbreaking, honest and inescapable of songs from his first album. As he sang another from that 1971 debut, "Sam Stone," about a drug-addicted veteran who squanders his life and money then overdoses on heroin, his solitary delivery was gradually accompanied by a standup bass which snuck in with low long chords in the background. Despite the gritty reality of such songs, Prine managed to keep the overall feeling of the evening fun and lively, a testament to his range and honesty.

For the last few songs Prine welcomed Amanda Shires and Jason Isbell back to the stage for the upbeat rockabilly tune "Dim Lights, Big Smoke," which he recorded with Shires for In Spite of Ourselves. After almost everyone in the ensemble had a vocal or instrumental solo they ended the show with "Paradise," another classic from his self-title debut, which recalls his home in Kentucky that was practically destroyed by strip mining. I don't think the irony was lost on anyone when they heard the chorus "Mister Peabody's coal train has hauled it away" reverberate through the concert hall named after that exact coal company.

Click the image below to see all of Monica Mileur's photos from the evening's performances. 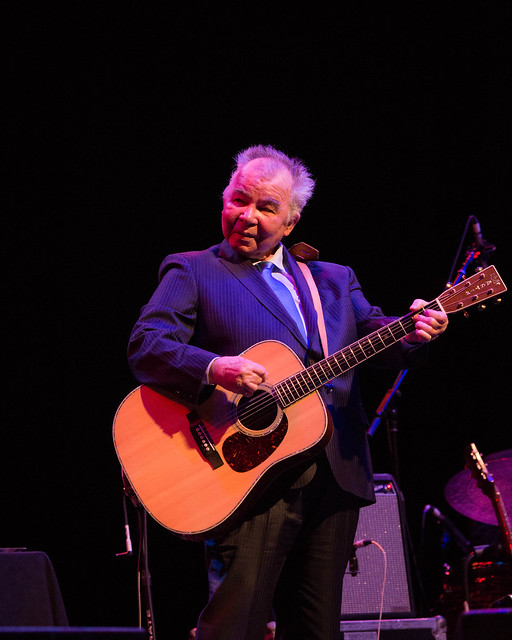